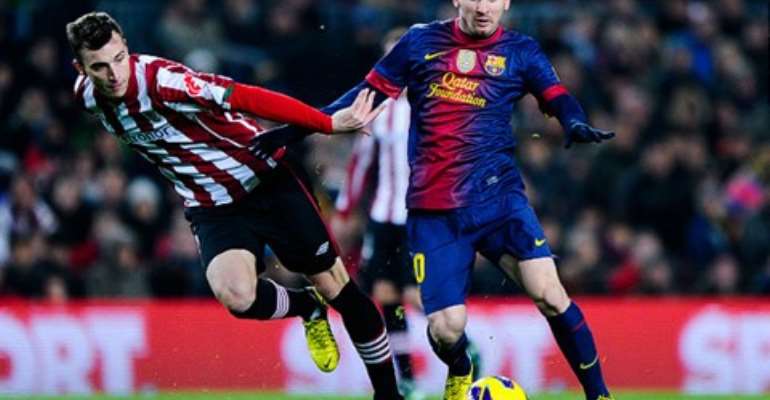 Lionel Messi netted a superb double as Barcelona recovered from a shaky start to secure a 4-1 comeback win at rain-lashed Sevilla that lifted the champions back to the top of La Liga.

Barca's defeat at home to Valencia last weekend meant they surrendered the lead for the first time since the beginning of last season and allowed Atletico Madrid to climb above them into first place.

Atletico crashed to a shock 2-0 reverse at promoted Almeria on Saturday and  Real Madrid, 4-2 winners http://www.aljazeera.com/sport/football/2014/02/messi-double-sends-barcelona-top-201421083548119977.html  at home to Villarreal, were the overnight leaders.

Barca's victory at the Sanchez Pizjuan in Seville means the top three all have 57 points with 15 matches left, with Barca leading Real on goal difference and Atletico in third.

"It was important for us to get back to the top today," Barca playmaker Andres Iniesta said.

"The conditions weren't the best but it was the same for them and in the end we managed to get the result," added the Spain international.

"Leo is one of the few players who can change a game in a few minutes if you give him just a bit of space. He does it in almost every game and he did it again today."

Barca initially looked out of sorts on a foul night in Andalusia and were in trouble when Alberto Moreno's deflected shot put Sevilla ahead in the 15th minute.

Messi, who looks to be getting back into his stride after a two-month injury layoff, fired Barca ahead with a typically brilliant effort 10 minutes later.

With the rain beating down and puddles dotting the playing surface, he picked up the ball on the edge of the area and lashed it into the far corner.

Sevilla had a couple of chances early in the second half before Messi's second in the 56th.

Andres Iniesta skipped through the centre and fed the Argentina forward, who took one touch before sidefooting in off a post.

Cesc Fabregas came off the bench and scored a delightful dinked effort to finish off a move he started two minutes from time.

In the earlier kickoffs, Real Sociedad missed a chance to close to within a point of fifth-placed Villarreal when they were held to a 0-0 draw at home to Levante.

Osasuna beat visiting Getafe 2-0 and Real Valladolid came from two goals down to rescue a 2-2 draw at home to Elche on their waterlogged Jose Zorrilla pitch.