Balotelli Cries …After Being Substituted 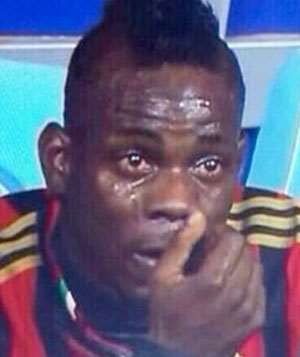 Mario Balotelli broke down in tears after being substituted on Saturday night.

The famously volatile Italian was seen crying on the bench as he watched his AC Milan side slump to a 3-1 defeat to Napoli at the Stadio San Paolo.

Balotelli had just missed a great scoring opportunity and seemed overcome by emotion.

There were early reports that the former Manchester City man had been subjected to racist abuse from Napoli fans, but Rossoneri boss Clarence Seedorf dismissed such talk.

“What can I say about Balotelli's tears? They were the tears of a sportsman,” he said.

“Mario is human. These are things that happen many times in football and sport in general.

“I'd say it was actually beautiful.”