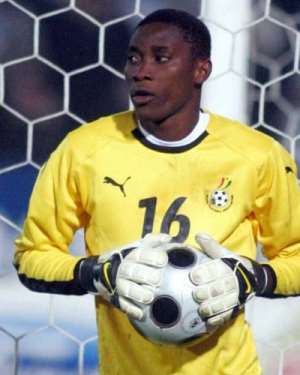 By Patrick Akoto
South African side Free State Stars are still sweating over the fitness of goalkeeper Daniel Agyei.

Agyei, 24,  is struggling with injury and missed the side's derby against Bloemfontein Celtic last weekend.

Stars' interim coach Themba Sithole used Ayanda Mtshali in goal for that game, ahead of the experienced Tshepo Motsoeneng as they lost 2-0 at the Goble Park Stadium stadium.

“Daniel is still injured. I heard that he had an operation to his groin. That's why Ayanda played in the game against Celtic,” a source is quoted by soccerladuma.

“It was surprising to see him in the starting line-up because we thought Tshepo would play in Daniel's absence.

But that's football and you can never know what's going to happen.”

The Ghanaian international has been the club's number one choice since he joined from Liberty Professionals.