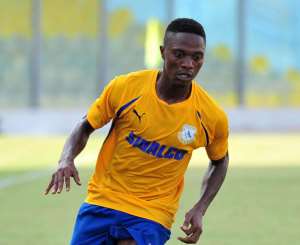 New Edubiase midfielder Asiedu Attobrah was content with the 1-0 home victory against Aduana Stars http://New Edubiase pip Aduana Stars at Bekwai after Wednesday's mid-week game, which pushes his team to 9th and four points above the relegation zone.

In an interview after the game, Attobrah spoke about the victory and after a two successive draws, insisted that this victory came at just the right time.

“It's nice and important to beat Aduana because we needed this win badly,” he said.

“We are, quite frankly, a satisfied group of players doing what we love to do.”

“We hope to continue winning all our home games.”
Attobrah played crucial role in Ghana's silver winning squad at the 2014 CHAN tournament.

Edubiase have won four, drawn two and lost one at home this season

I'll hand over power to the next elected president on 7th Ja...
2 hours ago

[VIDEO] Ghana is hot; our girlfriends are moving to Togo – J...
2 hours ago