Stephen Adams: “I love Hearts but I’ll never play for them” 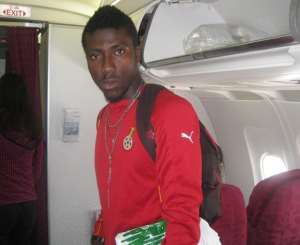 Aduana FC goalkeeper Stephen Adams has confessed to Allsports.com.gh that he is a staunch fan of Hearts of Oak, but he will never play for the Phobians in his entire football career.

It has been reported in the local media that Former Hearts coach David Duncan requested for the services of the goalkeeper, but a deal to secure his services failed to materialise.

Adams, who was aware of  Hearts' interest, admits he is drawn to the Phobians, having supported the club for his whole life, but he could never play Hearts despite his love them.

“I have supported Hearts since I was a kid but I don't want to play for them,” Adams said.

“When Duncan was the coach of Hearts, I spoke some officials of Hearts but i refused to join them.”

“I love to play where i am now. I don't want to disappoint Aduana Stars because they've done a lot for me.”

“I want t serve them for more years.”
The local Black Stars safest pair of hands was outstanding at the just-ended Championship for African Nations (CHAN) competition and has earned plaudits from around the continent for his wonderful display at the African showpiece.

His performance against Nigeria left Super Eagles coach, Stephen Keshi, to shower praises on him after his heroic performance denied Nigeria a place in the CHAN finals.

Stephen Adams is likely to make Ghana's World Cup final squad due to his superlative performances at the CHAN.