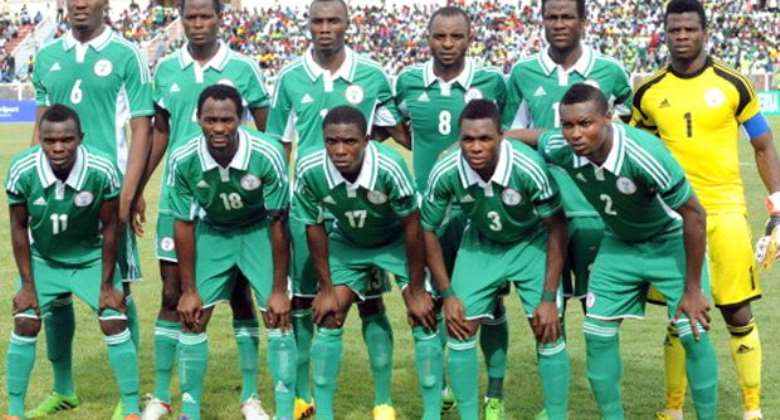 By Ameenu Shardow, follow on Twitter @alooameenu
The media in Nigeria are heavily criticizing the payment of a $100,000 bonus to their CHAN team after their semi final defeat to Ghana.

The players of the home-based Super Eagles are smiling all the way to the bank despite their inability to win the CHAN tournament staged in South Africa.

The team was handed a $100,000 winning bonus after their epic quarter final win over Morocco.

Stephen Keshi's side were rewarded with a similar amount in their penalty shootout defeat to Ghana in the semi finals – something that has incensed the Nigeria media who describe the development as a 'reward for mediocre performances' and 'a waste of public funds'.

Payment of winning [losing] bonus to teams in Nigeria is not a novelty.

Players demanded winning bonuses for their Round of 16 game at the 1998 World Cup against Denmark even before the match was played – a game Nigeria eventually lost after an impressive start to the tournament.

But Nigeria's Sports Minister Bolaji Abdullahi has defended the recent payment – saying it was meant to encourage the impressive performance of the team despite their defeat to Ghana.

Some critical media practitioners is Nigeria have called for immediate sacking of the Sports Minister for approving the payment of the 'losing bonus' especially with the overwhelming competing needs of the nation.

The media have drawn the government's attention to the needing funds to prepare athletes for the upcoming Commonwealth Games in Scotland.

One out of four marriages registered at AMA in 2021 collapse...
2 minutes ago