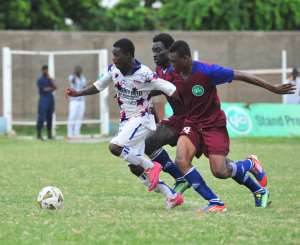 by Thomas Freeman Yeboah
Ghana Premier League resumes in the second round with a major boost to the 16 clubs, following the new sponsorship deal from First Capital Plus Bank as the headline sponsor of the league.

Kpando Heart of Lions will start the second round on a very good note after the club's takeover by Randy Abbey, an Executive Committee member of the GFA. The club finished the second round lying fourth on the league table as a major improvement over last season's performance at this time.

The Kpando lads will count on the experience of Edmund Owusu Ansah and Samuel Yeboah, a former league top scorer, who is now the top scorer of the club in the league, with 5 goals.

Liberty Professional will enter into this game with much confidence, having beaten Lions on the last day of the league and running away from Kpando with a draw last season.

The return of Kennedy Ashia, who who excelled in the league last season, should be a major boost.  Michael Appiah is Liberty's top scorer in the league with three goals.

- They have met 10 times at Kpando, with Lions winning on 5 occasions and Liberty taking home a win, which came in the 2008/09 season.

Note: Lions have won 2 and lost 3 in their last 5 premier league matches

Note: Liberty Professionals has won 2 and lost 3 of their last 5 premier league games.

Other match facts
Kpando Hearts of Lions played in 7 homes in the first round, won 4, drew 2 and lost 1