FEATURE: Will Michael Essien be a hit or miss at Milan? 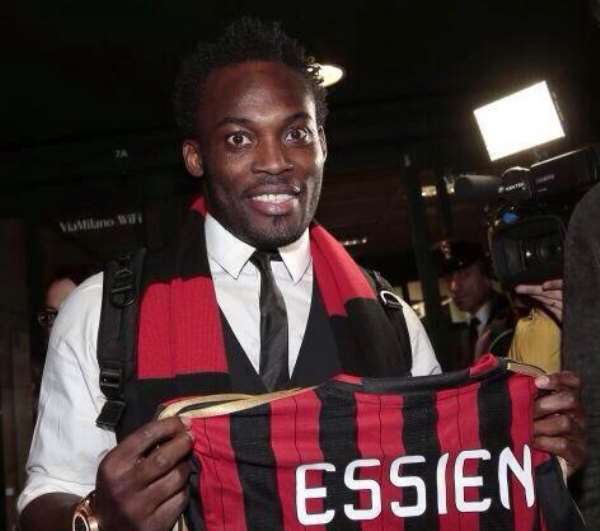 It was very uncharacteristic of him, hitherto when he spoke; it seemed like a huge bother. However on this occasion, he found words and strong ones too.

On his official twitter page, he posted: “Haters will broadcast your failure but whisper your success. Medicals done, looking forward to start my new life with AC Milan”.

Bam! That was one big hit! He had drawn the bowstring to its elastic limit and let go off the arrow at the 'haters'.

The message was a quick response to media reports that he, Michael Essien, had failed his medical examination as he sought to finalize his switch from Chelsea to AC Milan.

Now, as to who those 'haters” were, that wasn't significant, rather, it was what lay between the fine print; the tinge of frustration, the passion, the quest and the yearning to prove himself, that was.

Those unspoken words in the message convey the mood of a man earnestly seeking redemption of his career, one affected by at least 3 major surgeries, on his knee, which was the subject of the “failed” medical.

On hindsight, Essien would realize that, his twitter response was constructed in the heat of the moment, that the Italian daily, La Repubblica, which first reported the “failure” were perhaps just doing their routine reportage and not up to mischief, and assuming they even were, it will not be strange as we all have detractors, not least, super stars of Essien's stature.

It's a distraction Essien doesn't need to focus on; rather he should be concerned with settling into a starring role at AC Milan.

That is the kind of target he should be aiming his arrow at. Will Essien, now aged 31, be a hit or miss at Milan? It all depends on two factors coinciding.

THE MILAN FIX
If you were a new follower of the game and you saw AC Milan's mid table position in the Italian Serie A, you might be deceived about the stature of the club.

7-time European champions and 18-time Serie A champions, AC Milan have been a credible force in club football. Once upon a time, Milan dominated Italy, backed by the financial muscle of owner Silvio Berlusconi.

When Milan coveted a player in any part of the world, Milan got the player and at a point in time, had the world's best and expensive players on its roster.

However, a dwindle in the finances of Berlusconi and his Fininvest http://en.wikipedia.org/wiki/Fininvest group, has been inextricably tied to that of Milan's.

In the last couple of years, Milan has not been able to compete in terms of attracting star players or retaining them and in cases where they have, those players have been quickly sold ala Thiago Silva, Zlatan Ibrahimovic and Kevin Prince Boateng.

When Milan signed players, they did for minimum expense or almost for free as in the case of Kaka and Keisuke Honda.

This combined with a growing injury list has seen Milan plummet and unable to attain the height they did during the 2010/2011 season, when Milan last won the Serie A.

This season, recently sacked coach, Massimiliano Allegri's loss of control of the team and the lack of star quality culminated in Milan's 11 th league position before Alegri was sacked.

Former player, Clarence Seedorf, has been appointed with the hope that he will use his aura and personality as a rallying point to rescue Milan's tottering season.

Seedorf has however recognized that  it will  take more than his personality and working knowledge of the club to succeed; buying star players will be a major factor and this, he has began by roping in Michael Essien, albeit on another free transfer.

It may seem that the external atmosphere is being created for Essien to thrive, but his success will surely depend on how he adjusts to his new home.

THE PIRLO AND MUNTARI EXAMPLE
For Essien to succeed, he needs not look beyond Italy. At rival club, Juventus is a player, 34 years and an ex AC Milan player.

Andrea Pirlo, was a mainstay at AC Milan until 2011, when was let go on the assumption that he was spent. Pirlo went across town and resuscitated his career at Juve by reinventing his game.

Rather, by becoming a deep lying player-maker, Pirlo became the fulcrum of the Juve team and is the reason why Juve have been back to back champions. Pirlo has been duly recognized with the individual honour of Player of the season.

Essien could also pick a leaf from compatriot and friend Sulley Muntari. Discarded and written off at Inter Milan, Muntari picked himself up at AC Milan once he had the confidence and encouragement of Allegri, who incidentally was on the coaching staff at his former club, Udinese.

Essien has already enjoyed some kind words from Seedorf who has described him as a warrior and all round player.

With such endorsement, it is up to Essien to be mentally strong, ignore the 'haters”, focus on his training and also accept that his knee will not allow him to be the physical force he used to be.

Rather, he should build his game around his wits and experience as he competes with Riccardo Montolivo, Nigel de Jong and Sulley Muntari in defensive midfield. Only then, will he be close to making the impact he desires at AC Milan.

Hit or not? We can only tell in retrospect, but for now I will leave Essien with a different kind of message, a quote, not one from twitter but one from an unknown author: “An arrow can only be shot by pulling it back.

So when life is dragging you back with difficulties, it means that it's going to launch you into something great. Just focus and keep aiming!