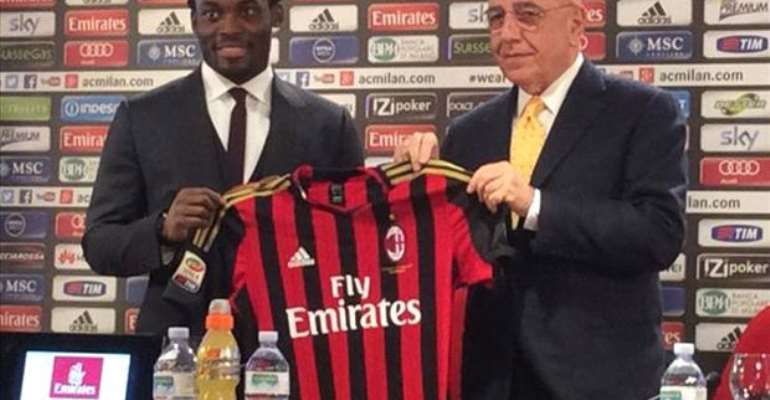 Ghana midfielder Michael Essien said he was “happy to have joined the Milan family” as he was unveiled by the Serie A club following his transfer from Chelsea.

“I have my best friend Sulley Muntari here and I've known him a long time,” the 31-year-old Essien said, who arrives as a free agent and has signed a one-and-a-half-year deal at the San Siro.

“There is also Ricardo Kaka who I played with at Real Madrid last year,” added the former Lyon player, who joins a club looking to climb the table in the coming months under recently appointed coach Clarence Seedorf.

“It was easy to make a decision after speaking to Clarence. Jose Mourinho (his coach at Chelsea and formerly in charge at Inter Milan) said it would be a great experience and I would settle well in Italy.”

Essien could feature for Milan in their UEFA Champions League last-16 tie against Atletico Madrid next month, with both Riccardo Montolivo and Muntari banned for the first leg.

And he will hope to make a big enough impression to seal a place in the Ghana squad for the FIFA World Cup™ in Brazil in June and July.

“The coach will decide when I play,” he said. “If it's good for the team, it's good for me. In this way I hope to go to the World Cup in Brazil.

“I would like to play in the World Cup with my national team. It's going to be hard, but in football anything can happen. We'll see what happens”

S/R: Man stabs his brother's wife to death; stabs one other,...
58 minutes ago