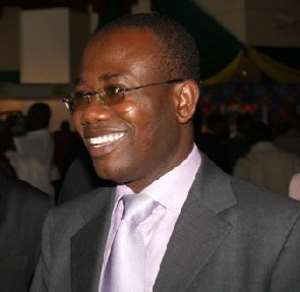 By Patrick Akoto
Today marks exactly eight years that Kwesi Nyantakyi was elected as the first president of the Ghana Football Association.

The ambitious football chief strolled to an easy win on December 30, 2005 that also had Ade Coker and Kojo Bonsu as contestants to elect a new Ghanaian FA leader.

Eight years down the line and the achievements of the 44-year-old lawyer has overshadowed some of the low-key moments in his era.

Ghana football has seen a massive transformation since he took in 2005, chalking many successes both on and off-the- field with two World Cup berth in 2006 and 2010 top of the growing list of modest achievements.

The highly-respected Ghanaian football administrator also supervised the country's third successive qualification to the global showpiece after the Black Stars thumped African giants Egypt in a play-off tie to secure qualification to Brazil 2014.

The meteoric rise of the Ghana FA has thrilled many as he has used his incredible lobbying skills to get as many as nine Ghanaians to work on CAF standing committees since he was appointed onto the Executive Committee two years ago.

There are many who have tipped him to land a top post at the continent governing body as he is well-regarded by CAF aficionados due to his leadership skills and work ethics –playing a key role in a number of structural adjustment embarked on by CAF.

He was also in charge when Ghana became the first African country to win the U20 World Cup – feat yet to be matched by any country on the continent.

His leadership style has also been praised in many quarters but he has also had his fair share of criticism with sweeping allegations of corruption being leveled against him by a section of the Ghanaian media on daily basis.

There are others who have also criticized him for his failure to land a sponsorship deal for the Ghana Premier League after their relationship with giants telecommunication outfit Globacolm broke down.

With Ghana set to go to the polls to elect a new leader n 2015, there are many who have tipped him to go unopposed due to his outstanding performance as the country's FA chief over the past eight years.