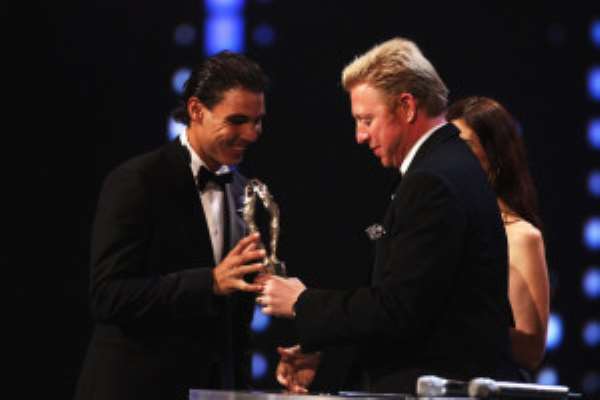 http://en.africatopsports.com/wp-content/uploads/2013/12/Rafael+Nadal+Boris+Becker+Awards+Ceremony+z0Sm9aZwDiql.jpg Former World No. 1 Boris Becker hails the incredible return from injury of Rafael Nadal and feels he can clinch four more Grand Slam titles if he perseveres with his never-say-die attitude.

The current World No. 1 Spaniard, who managed to come back and win 10 single titles after being ruled out by a recurring knee injury for seven months, has extremely impressed Becker who describes him as a legend for the world's tennis.

'It's a pleasure to talk about Nadal. He has made one of the best comebacks in the history of world sport. The best there ever was in tennis. It's like a story in a book. He returned in February in South America, successfully defended his Roland Garros title, his eighth, and although he did not then do well at Wimbledon, incredibly earned the number 1 ranking. I saw him at the start of the year at his coach's house in Manacor. He was still injured…and now he's number 1! He's a great champion' , Becker expressed.

He further added, 'A year ago I would have said it was impossible to match Federer in Grand Slam victories. But nothing is impossible for Nadal. He's 27 years old and Federer has 17 Grand Slams. Four more are possible.'