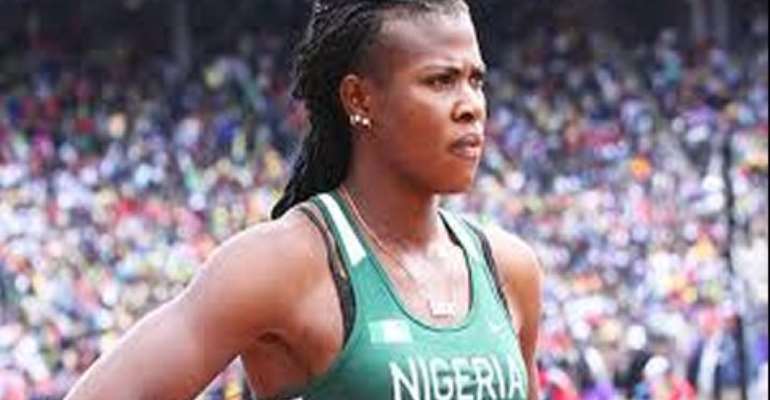 Nigeria's Track and Long Jump queen, Blessing Okagbare, has been honoured with the prestigious award of Athlete of the Year by the Nigeria Olympic Committee (NOC), for her incredible performance in the outgoing year.

Okagbare's sterling performance at the IAAF World Championship in Moscow last August where she won silver and bronze medals in the long jump and 200m shattered a 14-year jinx which plagued Nigeria.

The award was presented by Gombe State Governor, Dr Ibrahim Hassan Dankwambo to round off the Annual General Meeting of the NOC which held last week.

At the night of glitz at the Government House in Gombe, the Nigeria Football Federation (NFF) whose Super Eagles won the African Cup of Nations and qualified Nigeria for the 2014 World Cup in Brazil next year as well as the Golden Eaglets that won the FIFA Under-17 World Cup in United Arab Emirates was adjudged the Most Improved Sport Federation.

It received a glittering trophy for bringing back joy to Nigerians in football.

When the award to the NFF was announced, the rapturous applause that followed no doubt showed that it was one well deserved.

Others who walked tall with awards in the night include, Chief host, Governor of Gombe Dr Dankwambo who won the Icon of Grassroots Sports Development award, Director General of the National Sports Commission, Hon Gbenga Elegbeleye won award for Outstanding Contribution to Sports Development while IOC member, Habu Gumel, won the award for Outstanding Achievement in Sports Administration.

President of the NOC, Sani M. Ndanusa said that the award winners were selected purely on merit and was meant to encourage them and that Nigerians were appreciative of their contributions to the country.

Governor Dankwambo praised the NOC for being blessed with the quality of leaders as exemplified by Ndanusa and promised to turn Gombe State to a Mecca of sports.

Sports Minister, Mallam Bolaji Abdullahi also received d award for Champion of a New Sport Architecture for his exemplary leadership that has yielded results in such a short term.