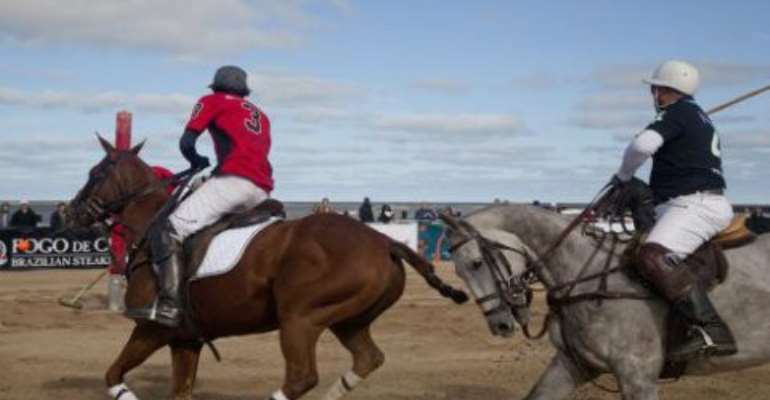 South Africa played a determined game to overcome Ghana to emerge winners of a thrilling game of Polo and earn the bragging rights as victors of the 2013 Vodafone Business Solutions Challenge Cup on Saturday.

Such was the intensity and competitiveness of the polo match at the Accra Polo Turf Club, as it was closely fought until Team South Africa managed to stamp their authority in the final stages of the game to eventually run out 5-3 winners to win the trophy.

Ghana started on a bright note and deservedly got the opener in the first chukker through Eric Gene.

Ahmed Umoru made it two for Ghana heading into the second chukker. South Africa captain Angus Williamson pulled one back for visitors, before Lionel Foster equalising for Team South Africa.

Andrew Gilson made it three for the visitors in the third chukker after another full-gallop by the pack saw him ahead and slotting the ball into the empty goal post and Lionel Foster made it 4-2 in favour of the visitors.

But the Ghanaians came back strongly in the fourth chukker by pulling one back, however, the visitors' superiority and experience helped Lionel Foster to score the match winner at the stroke of match time.

Amid pomp and pageantry, the polo match couldn't have served a more competitive game which was rightly acknowledged by the South African High Commissioner to Ghana, Jeanette Ndhlovu, who showered praise on both team after the game.

“I'm proud to witness a good game today. I thank everyone for welcoming the South African team for this match. Both team played well but there must be a winner and South Africa won. Congratulations to South Africa!,"  Mrs.  Ndhlovu said.

President of Ghana Polo club, Kwakye Dopoah Dei, said he was disappointed Ghana couldn't hold on to their early lead to win the game.

"I am highly disappointed that we lost this match, but as a sportsman, i will take it as a game. We will organise a lot more training matches for the Ghana team in order to form formidable Ghana Polo team," Mr. Dei said.

Andrew Wilson for his efforts got the Most Valuable Player trophy.

Ghana will host another Polo Championship on December 18, which will host countries like Argentina, Chile South Africa and Nigeria.