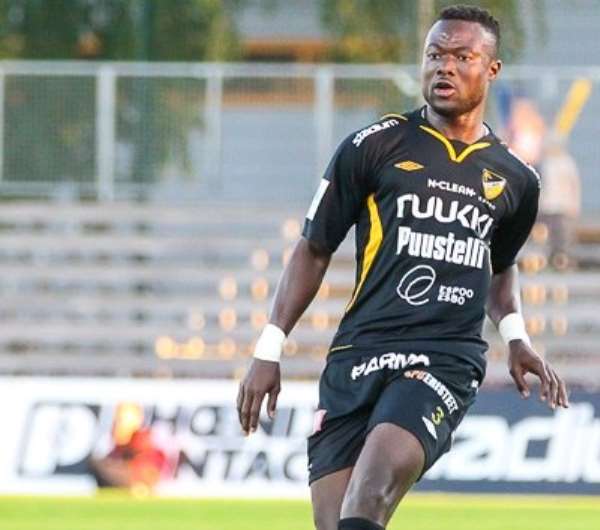 Ghanaian defender Gideon Baah made a huge impact on his debut season abroad in the Finnish Veikkausliiga.

The 22-year-old won two awards- the league's Best Defender and Rookie of the Year accolades.

Baah, a natural left-back, made 29 appearances and scored two goals to help FC Honka finish second on the league table.

The former Asante Kotoko player speaks to MTNFootball.com by reviewing his season and looking forward to the upcoming objectives.

This was your first season abroad as a professional. Did it meet your expectation?

Yes I can say I met my expectation because I can see I have developed very much as a player and as a person.

How would you describe the Finnish League as compared to the Ghana Premier League.

You won two awards at the end of the season. Talk us through those awards.

Does it mean you are the hottest commodity in the Finnish League?

Which leagues in Europe are you looking at?
I want to take it a step at a time and don't want to jump ahead of myself so lets say the Danish or French league will be appropriate for me now.

What have you been able to add to your style of play since moving abroad?

I think my knowledge of the game has increased and am now familiar with the European terrain and also become more versatile because I was used in various positions in the course of the season.

What is your dream as a professional footballer and do you feel you are closing in on that?

What are expectations for next season after raising the bar on your debut?

I think I am expecting a tough and difficult challenge next season cos people are expecting much from me.

Are you thinking about gatecrashing Ghana's squad for the 2014 World Cup?

Everything is possible in football and that's why am an optimist and will take any chances when the opportunities arises.