Five remarkable comebacks ahead of Ghana vs Egypt clash 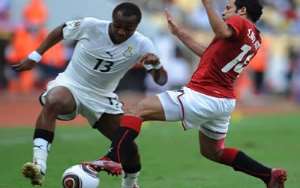 In the 1985 UEFA Cup third round, Monchengladbach looked to have settled the tie in their favour when they crushed Real Madrid 5-1 in Germany.

Real Madrid took a 2-0 half-time lead at Santiago Bernabeu in the second leg, but they still needed to score two more goals to overturn the deficit and advance.

The breakthrough came with two late goals from Jorge Valdano and Carlos Santillana as Real Madrid defied the odds and went on to win the competition.

English side QPR were overwhelming favourites to qualify for the 1984 UEFA Cup third round after thrashing Partizan Belgrade 6-2 at home.

But Partizan Belgrade stunningly stormed back in a remarkable second leg to score four goals without reply and go through on the away-goal rule following a 6-6 aggregate draw.

This meant Uerdingen needed to score five goals to advance.

The unthinkable happened, with Uerdingen getting more than they sought: Six goals that gave them a 7-3 win for a 7-5 aggregate victory.

Barcelona vs Anderlecht (0-3, 3-0)
Barcelona looked to be enjoying a smooth passage when they secured a 3-0 away victory at Anderlecht in the second round of the 1978 Cup Winners' Cup.

However, they were made to work hard for the win after Anderlecht stunned them 3-0 at the Nou Camp to level the aggregate score. The Catalans won 4-1 in penalty shootout to advance.

Deportivo La Coruna vs AC Milan (1-4, 4-0)
Featuring the likes of Paolo Maldini, Alessandro Nesta, Cafu and Kaka, AC Milan found no difficulty brushing aside Spain's Deportivo La Coruna with a 4-1 home win in the first leg of the European Champions League in 2004.

But the modest Deportivo roared back in style, with goals from Walter Pandiani, Juan Carlos Valeron, Albert Luque and Fran giving them a 4-0 second-leg win for a 5-4 aggregate victory.