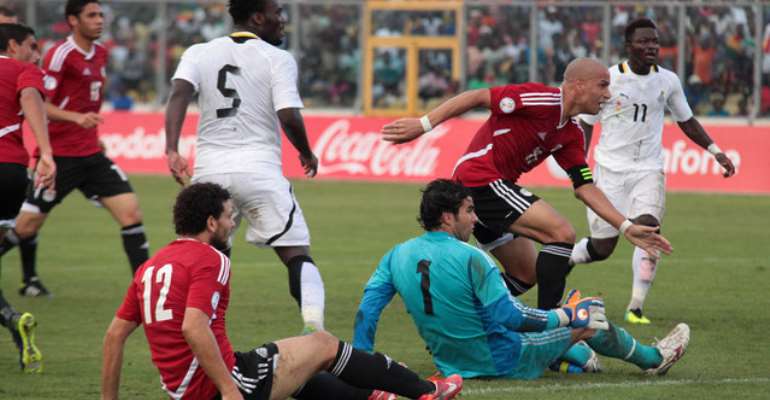 Progress to the finals in Brazil appears to be a mere formality for Kwesi Appiah's men, who made light of a tie billed as the tightest of Africa's concluding qualifying phase with an emphatic 6-1 win on home soil last month over a side who had not dropped a point in the group stage.

Asamoah Gyan set the ball rolling with a fourth-minute strike in Kumasi and went on to net a double – once again confounding Egypt coach Bob Bradley, whose USA team he dumped out of the 2010 World Cup.

Bradley has kept faith with almost the same squad that were subjected to humiliation last time out, although Al Ahly's Abdallah El-Said has made way for Zamalek's Ahmed Eid and Sherif Abdel-Fadil gets the nod over Hull City's Ahmed Elmohamady.

Only a truly improbable turn of events will give Egypt any hope of turning the tie around, and the focus in the build-up to the match has been upon safety fears.

Ghana's FA this week declared themselves satisfied with the security arrangements made by their Egyptian counterparts, having previously asked for the match to be moved away from Cairo.

Their statement came after Chelsea midfielder Michael Essien underlined the issues himself and his team-mates have with playing in the Egyptian capital, in the wake of continued unrest in the country.

“I am not afraid or scared of the Egypt team,” Essien said. “But I am frightened to play in Egypt because of the on-going fights over there.

“We have nothing to do about that because we are told to play in Egypt and we will do just that.”

In ominous news for Egypt, Ghana appear to be stronger on paper than they were first time around, with star man Kevin-Prince Boateng back in contention following a knee injury.

And, despite the distractions, assistant boss Maxwell Konadu insists that the visitors' minds are fully on the job.

“So far, so good in camp,” he said. “The atmosphere is very good and everybody is in a good frame of mind.

“Initially we were not sure it was too good (playing in Cairo) but after a few meetings and advice, we think where we are going to play the match is very secured and removed from the trouble spots.”