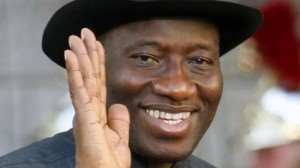 http://en.africatopsports.com/wp-content/uploads/2013/11/169-goodluck-jonathan.jpg This a really deserved applause!

According to KickoffNigeria , President Goodluck Jonathan has congratulated the Super Eagles for qualifying for next year's World Cup after beating Ethiopia 2-0 in Calabar on Saturday evening.

In a congratulatory message released immediately after the game, the President hailed the determination of the players in ensuring Nigeria qualify for their fifth World Cup appearance.

“President Jonathan joins other proud and happy Nigerians in applauding the Super Eagles' dogged and determined performance against the Ethiopians over the two legs of the final qualifying round, which ensured away and home victories, and also ensured that Nigeria will be at the World Cup Finals for the fifth time,” the statement from the Presidency read.

Note that Coach Stephen Keshi  also did not fail to hail his troop's sacrifice for the national sake. http://en.africatopsports.com/2013/11/17/stephen-keshi-i-thank-the-players-because-a-lot-of-sacrifices-went-into-this/