Egypt: Aboutrika to challenge Ghana before hanging up 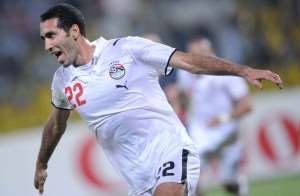 http://en.africatopsports.com/wp-content/uploads/2013/11/Mohamed-Aboutrika.jpg Rumors currently flow in Egypt that Al Ahly star Mohamed Aboutrika will not play against the Black Stars  as he announced his retirement from football after the Reds' Champions League triumph over Orlando Pirates.

According to assistant coach Diaa Al Saied of the Pharaohs, the Al Ahly legend will play against Ghana in the second-leg World Cup playoff next week.

'The rumour that Trika will not play the next match is completely not true,' Diaa told Supersport.

'He is now in the camp where he joined us on Tuesday and has been training with his team mates ever since.

'Aboutrika will retire after playing with Al Ahly in the next FIFA Club World Cup next month in Morocco, I talked with him and he told me that.'