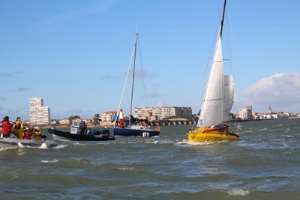 More than 3 metres high waves as well as wind from north-north-west with more than 20 knots will be an additional challenge for the Austrian extreme sailor.

Hundreds of fans came just for the departure of Norbert Sedlacek to Les Sables d'Olonne to wish him “fair winds”.

“Proof of Principle“ stands for the worldwide first attempt to cross the North Atlantic in a 16 feet or 4.90-meters boat, a single-handed and nonstop race from east to west by the southern route and subsequently from west to east by the northern route.

In 6-8 weeks the skipper Norbert Sedlacek will pass under the Statue of Liberty to arrive at New York Harbor. In May 2014 he will cross the North Atlantic from west to east to the port of Les Sables d`Olonne.

To fulfill these two world record attempts Norbert Sedlacek will sail approximately 8.000 nautical miles in partly drift ice ocean on a boat which is not only shorter than the average height of wave, but he will also take a risk to be a prey of the ocean sharks. During the estimated sailing race of 80 days, the Open16 FIPOFIX provides only 1.5 m² of “protected” area.

By this extreme sailing project, Norbert Sedlacek wants to establish new sailing world records of proof that with the synergies between the futuristic art in engineering, the development of innovative materials as well as the personal experience, the ideal preparation and the resolute endurance commitment in sailing everything is nearly possible.

Hottest Photo Reports
Catch up with all the political quotes from our politicians.
Advertise here
More from International
ModernGhana Links
BIBA cancels all February 2021 events...It would be Criminally Negligent to authorise events in February, says BIBA VP
Commonwealth To Unveil ‘4D Strategy’ On Reviving Sport At Ministerial Forum
Romelu Lukaku Before The BVB-Dortmund Game: The Man Who Wanted To "Destroy" His Opponents
TOP STORIES

Your exceptional leadership in West Africa appreciated by US...
20 minutes ago