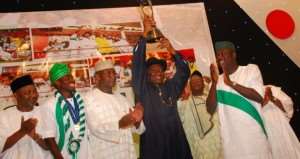 According to breaking news by our colleagues from KickoffNigeria , President Goodluck Jonathan of Nigeria has announced that cash gifts and national honours will be handed out to players and officials of the victorious Golden Eaglets.

The sum of N2 million was promised to each of the players, while the Head Coach of the team, Manu Garba , was handed N3 million .

Assistant coaches, Emmanuel Amunike and Nduka Ugbade , were also not left out as they received gifts of N2.5 million each, while the team's doctor, physiotherapist, secretary, and the Chief Technical Officer were given N500,000 each.

Other members of the team like, the Team Co-ordinator, Media Officer and Curator also received N300,000 each.