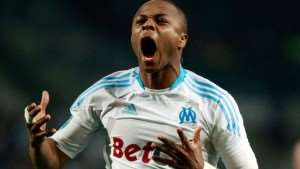 http://en.africatopsports.com/wp-content/uploads/2013/11/AYEW-art-1.jpg Ghana's international midfielder Andre Ayew is the best player in Marseille. No one other than Jean-Michel Larque , The ex-RC Paris trianer, who is a football analyst in leading television stations just dropped it.

Ayew, son of Ghana legend Abedi Pele , was the man-of-the-match on Wednesday in the Champions League game as his side lost to Napoli.

But following Marseille's ambition to sell out the son of Ghana legend Abedi Pele http://en.africatopsports.com/2013/11/03/liverpool-to-sign-andre-ayew-for-16million/ , Larque things it is not a good idea since the eldest of the Ayew brothers for him is the only high level player in OM.

'Ayew is the only high level player in the OM squad,' Larque told RMCsports.

'Undoubtedly it was the best match OM have played this season in the Champions League. This game proves that Marseille is on the right track.

'For now, Andre Ayew is the best OM player. He has good years ahead of him, he has shown all these while that he is better than everyone at Marseille.'

Ayew is the viewfinder of Arsenal and Liverpool in the Premier League. http://en.africatopsports.com/2013/11/03/liverpool-to-sign-andre-ayew-for-16million/