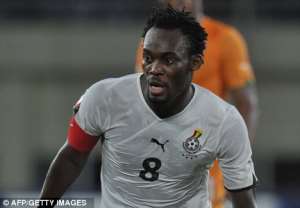 Chelsea midfielder Michael Essien will arrive in Accra on Thursday night for his father's  funeral this weekend.

The Ghana international has been given indefinite compassionate leave by manager Jose Mourinho.

James Essien, a former Hearts of Oak player, passed away on September 2 in his native country after battling illness.

Essien will bury his father in a traditional three-day Ghanaian funeral in his hometown of Gomoa Odoben in the central region of Ghana.

A high-powered Ghana FA delegation including president Kwesi Nyantakyi and other top executives will travel to support the Ghana international at the funeral.

Black Stars coach Kwesi Appiah and his technical team are also expected to attend the funeral to offer their support to the midfielder.

It is rumoured that the 30-year-old had a good relationship with his father until one Dela Ackumey allegedly persuaded  his father  in signing some documents that had dragged the football star to the law courts.

The case is still in the law courts and sources say,the football star has so far spent millions of dollars in this legal battle.

This put a strain  on their relationship and a huge publicity  on the matter until Essien forgave his father.

The Chelsea star had been in constant touch with the father until the man passed away on September 2.