Revealed: How Kwadwo Asamoah Won Juventus Battle Over Who To Stop Ronaldo 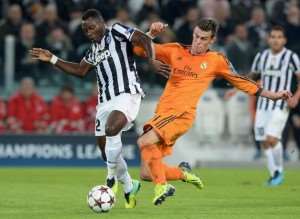 Juventus boss Antonio Conte had one doubt before naming his starting XI for Tuesday night's Champions League against Real Madrid.

Conte had doubts over who should begin in the left-back role and that was a choice of either Kwadwo Asamoah or Angelo Ogbonna.

The Old Lady were to play in the 4-3-3 shape which they used in the 2-1 loss in Spain two weeks ago.

The latter, who is of Nigerian origin, was used in that role during the first encounter between the two sides.

But the tactician opted for the Ghanaian instead mainly because of Asamoah's skillful nature and ability to start swift attacks when he takes the ball from the opponent.

Conte was not disappointed as Asamoah executed the job to perfection which led to him blunting the effectiveness of Cristiano Ronaldo and Gareth Bale.

The Real Madrid duo are feared in the world because of their immense talents when they are playing from the right side of attack.