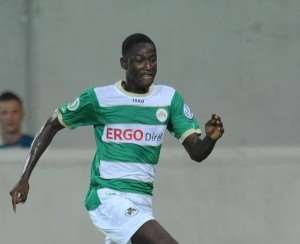 Ghana defender Baba Abdul Rahman failed to make the Ghana squad that will travel to Cairo to face Egypt in a World Cup play-off return encounter.

The Greuther Furth left-back was conspicuously missing from the 24-man squad released by coach Kwesi Appiah on Monday.

The former Ghana Under-20 star was left out following the return of experienced Harrison Afful.

Afful has been named in the squad after serving his one game ban during the 6-1 hammering of the North Africans in the first leg in Kumasi.

Rahman must now work hard at his German outfit to once again catch the eye of the Ghanaian trainer who has an open door policy for all in-form players.

The ex-Asante Kotoko defender was at his lethal best for Greuth Furth in their 6-2 win at at Erzgebirge Aue in the German second-tier over the weekend.