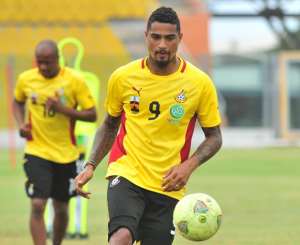 Ghana coach Kwesi Appiah has called up Kevin-Prince Boateng for their World Cup playoff return clash against Egypt this month.

Boateng has been accused of playing hide-and-seek with the Black Stars since announcing his return from injury.

Boateng reported to camp in September this year but missed the final Group D qualifier against Zambia at home claiming he was unfit.

Last month, the 26-year-old sat out the first leg 6-1 win over Egypt after picking up an ankle injury a week before the match.

But Appiah has decided to hand the former Germany youth international another call-up in what has been described as the coach's trust for the midfielder.