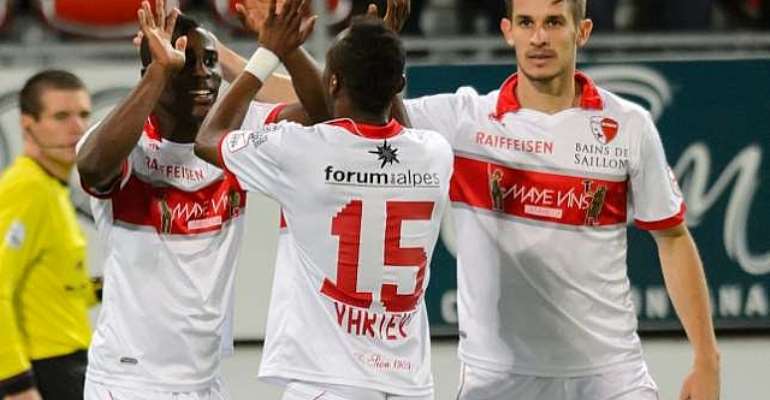 There were seven low-profile goals for Ghanaian players abroad over the weekend with Black Stars captain Asamoah Gyan among the scorers.

Young striker Ebenezer Assifuah and Ishmael Yartey did the magic for FC Sion while Shadrach Eghan continues to wow the Dutch fans netting an incredible finish for FC Twente.

Patrick Amoah, Fred Benson and Robin Quaison all got on target as Jonathan Mensah returned action after sometime in the treatment room. Read GSN's comprehensive report on how Ghanaian players fared abroad over the weekend with Akyereko Frimpong Manson giving you more.

ENGLAND
Michael Essien was not in the Chelsea team that were beaten 2-0 at Newcastle United on Saturday.

Emmanuel Frimpong could not the first team grades at Arsenal when they thumped Liverpool 2-0.

Winger Albert Adomah lasted 85 minutes for Middlesbrough in their 1-0 loss at Blackburn Rovers.

Jeffrey Schulpp played full throttle and set up a goal for Leicester City who posted a 3-0 win over Watford in their away fixture.

Youngster Koby Arthur could not make the Birmingham City first team squad in their home loss to Charlton Athletics.

In the League One, Patrick Agyemang played 76 minutes for Portsmouth when they beat Exeter City 3-2.

Andre Ayew missed the game due to suspension while John Boye watched from the stands.

Defender Jonathan Mensah returned to action and played 66 minutes for Evian TG in their 2-1 win over Toulouse.

In the Ligue 2, Kwame Nsor came off the bench to play 29 minutes for Metz in their 2-1 away win over Istres.

Dennis Appiah was at the heart of defence for Caen who were beaten 2-1 at Lens.

BELGIUM
Bennard Kumordzi was key in midfield for KRC Genk when they managed a narrow 3-2 in over bottom-placed Mons.

Midfielder Abraham Kudemor was an unused substitute by Sporting Charleroi who lost 2-1 at Lierse SK.

Abdul Yakinu-Iddi and Jerry Vandam were both involved in KV Mechelen's 2-2 home draw with Zulte-Waregem. Jerry lasted the entire 90 minutes while Iddi came off the bench to play 13 minutes.

Standard Liege picked back their winning form after beating KAA Gent 1-0 at their favourite home grounds.

Ghanaian starlet Eugene Ansah marked his debut for Lokeren in the Belgian top-flight after coming off the bench in the 85th minute in their 1-0 loss at Club Brugge.

Enock Adu-Kofi was not in the Brugge team.
In the Second Division defender Samuel Asamoah was a full timer for AS Eupen in their 1-1 draw at Excelsior Virton.

Stromsgodset held Tromso to a 0-0 draw. Adam Kwarasey was the only Ghanaian who travelled with the Stroms side as Razak Nuhu and Bismark Adjei-Boateng were both out of the team.

King Osei-Gyan warmed the Viking bench in their 2-1 away loss to Rosenborg BK.

Kennedy Ashia was dropped from the Brann team in their 3-1 away loss to Sandnes Ulf.

Mahatma Otoo saw full time action for Sogndal when they were beaten 3-1 at Honefoss. Compatriot Gilbert Koomson was introduced midway through the second half of the game.

PORTUGAL
Alhassan Wakaso played an influential role for Rio Ave in their 1-0 away win over Sporting Braga in the Liga Sagres.

AGF sneaked past Viborg with a 1-0 win. Defender Dominic Oduro lasted 58 minutes for AGF while Kevin Mensah also saw 78 minutes of action for Viborg but his twin brother Jeff Mensah warmed the Viborg.

Youngster Danny Amankwaa was not in the FC Copenhagen team when they hammered bottom-placed Nordsjælland 4-0. Former Stade Rennes midfielder Kamal Issah did not travel with the Nordsjælland team.

HOLLAND
Dutch-born Elvis Manu was left out of Feyenoord first team squad when they travelled to beat Cambuur 1-0 on Sunday.

Defender Johan Kappelhof was in central defence for Groningen when they drew 3-3 with Roda FC.

Fred Benson scored the equaliser for PEC Zwolle but was sent off in the 85th minute in a 1-1 draw at PSV Eindhoven.

Ghana's Christian Atsu played full throttle for Vitesse Arnhem in their shocking 1-0 away win over Ajax Amsterdam in Dutch Eredivisie on Saturday.

In the second-tier league, Erixon Danso watched the entire game from the bench when his Dordrecht thrashed Den Bosch 5-0.

Mustapha Yahaya was a second-half substitute by Jong FC Twente when they lost 3-0 at Excelsior.

Swedish-born Patrick Amoah converted a penalty for Fortuna Sittard in the 61st minute to help them draw 1-1 against Almere City.

GERMANY
Kevin-Prince Boateng played 93 minutes for Schalke 04 when they won 2-0 over Hertha Berlin.

Ghana defender Baba Abdul Rahman was in sensational form for Greuther Furth in their 6-2 win at Erzgebirge Aue in the German second-tier.

In-form Ghanaian defender Phil-Ofosu Ayeh scored the equalizer for MSV Duisburg in their 1-1 draw at home to Stuttgater Kickers in the German lower division.

19-year-old Erich Berko finished the full 90 minutes for Stuttgart II in their 2-1 win over Osnabrück.

Evans Nyarko came off the bench to play 11 minutes for Borussia Dortmund II in their 1-0 loss at RB Leipzig.

Atsu against Ajax
TURKEY
Striker Kwame Amponsah-Karikari lasted 65 minutes for ten-man Balikesirspor in their 3-1 loss at BB Ankaraspor in the second-tier league.

Emmanuel Banahene lasted the entire duration of the game for Sanliurfaspor when they were beaten 1-0 by Trabzon. Former Hearts of  Oak midfielder Torric Jibril and Seidu Yakubu were both unused by Trabzon.

SWEDEN
In the second-tier league Thomas Boakye played the full 90 minutes for Ostersunds when they lost 2-1 at Hammarby. Isaac Telly Shaze watched the action from the bench.

Swedish-born R obin Quaison marked the end of his season with a strike for AIK Solna when they beat Helsingborg 2-1. Former New Edubiase captain Moro Ibrahim played the entire match for AIK while Ghana U20 defender Ebenezer Ofori came off the bench to play for AIK.

Striker David Accam was replaced after the break with Ema Boateng coming off the bench in the second half.

Former Heart of Lions striker Benjamin Fadi was not in the Malmo FF team when they thumped relegated Syrianska FC 3-1.

Djurgarden held Öster to a 1-1 draw to finish the season in a mid-table place. Liverpool target Daniel Amartey played the entire 90 minutes while Yussif Chibsah came off the bench in the second half for Djurgarden.

Forward Godsway Donyoh was unused.
Joachim Adukor was axed from the Gefle final day squad when they lost 1-0 to Elfsborg. However, Zakariah Abdoullai sat on the Gefle bench.

Nasiru Mohammed did not travel with the BK Hacken side for their last game of the season which ended 2-2 at Åtvidaberg. Reuben Aryana was also not in the Hacken team.

CROATIA
Defender Lee Addy did not start for Dinamo Zagreb in their 3-0 win over Lokomotiva on Saturday.

SPAIN
Midfielder Thomas Teye Partey started the game and lasted the entire duration for Real Mallorca in their 1-0 win over Lugo.

SERBIA
In the Serbian Super Liga, Abraham Frimpong and Obeng Regan were both in action for Napredak when they lost 1-0 to Rad Beograd on home turf.

ARMENIA
Neither Samuel Kyere nor Jacob Apau was in the Shirak FC team when they won 2-1 against Ulisses.

SCOTLAND
Dutch-born  Kevin Luckassen was a full timer for Ross County in their 2-0 loss at St Mirren.

Striker Samuel Afum was unused by Young Boys who beat Grasshoppers 1-0 at their own backyard.

ITALY
Kwadwo Asamoah produced an inspirational display for Juventus who beat Parma 1-0. He lasted the full 90 minutes of the game.

Sulley Muntari lasted 69 minutes for AC Milan when Fiorentina brushed them aside 2-0 at the San Siro.

Starlet Emmanuel Gyasi remained with the Torino Primavera side as the first team squad held AS Roma to a 1-1 draw.

Black Stars midfielder Emmanuel Agyemang-Badu saw full time action for Udinese when they were beaten 3-0 by Inter Milan at the Stadio Friuli.

Isaac Cofie started his first game of the season for Genoa and helped them to record a 2-0 win over Lazio in an away fixture.

In the Serie B, Mase Nana Addo Welbeck warmed the bench for Brescia in their 3-3 draw against Pescara on Friday.

Masahudu Alhassan played full throttle for Latina in their 1-0 win over Reggina.

Genoa loanee Moro Al-Hassan was forced off the pitch an injury in Cesena's 1-1 draw against Ternana.

Fiorentina loanee Amidu Salifu was not in the Modena team when they beat leaders Virtus Lanciano 1-0.

Former Liberty Professionals midfielder Khalif Alhassan was a second-half substitute by Portland Timbers who Seattle Sounders 2-1 at their own backyard.

Canadian-born Kofi Opare was in action for LA Galaxy when they pipped Real Salt Lake 1-0.

UAE
Ghana striker Asamoah Gyan scored the opening goal from the spot for Al Ain in their 3-2 win over Al Nasr.

Emmanuel Clottey came off the bench to play the entire second-half for Al Dhafra in their 2-1 loss to Al Wasl.

OMAN
Veteran Ghanaian attacker Godwin Attram set up a penalty for Al Dhufar as they drew 1-1 against Al Seeb.

TUNISIA
Black Stars defender Harrison Afful got on the score-sheet for Esperance when they posted a 5-0 win over Stade Tunisien.