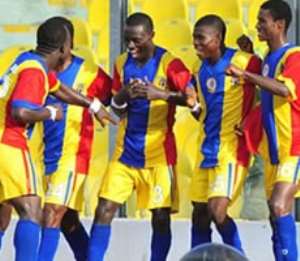 Accra Hearts of Oak survived and early scare by Kumasi-based King Faisal to rescue a point in Sunday's Glo Premier League clash between the two sides at the Accra Sports Stadium.

Sulley Moahmmed put King Faisal ahead in the first half but Hearts fought back and secured a crucial courtesy, Romeo Agban.

The game ended 1-1.
Berekum Chelsea’s poor start continues.
The Berekum-based club are now in the relegation zone as their poor start to this season’s premier league continued on Sunday in Sekondi. The, side, who finished second in last season’s premier league lost 3-1 to Sekondi Hasaacas on match-day-10 at the Essipong stadium. Chelsea got the first goal through Laundry Bosson in the first half but Hasaacas rallied back to draw level through Gabriel Adjei before strikes from Kingsley Yamoah and Samuel Afful completed the demolishing exercise.

The former Ghana premier league side have picked just two wins in ten games, a poor return judging by their quality and high standards.

In other premier league games