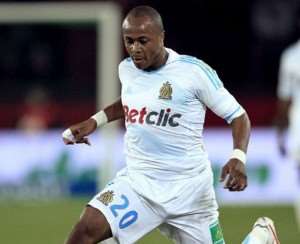 Ghana winger Andre Ayew will be a $16m target for English Premier League club Liverpool in the next transfer window.

The Ghana international front man looks certain to be sold by Olympique Marseille after their dreadful show in Europe and a dismal start to the domestic campaign.

They are bottom of their Champions League group that includes Arsenal, Napoli and Borussia Dortmund.

Marseille have lost all three European matches they have played – two of them at home. That even leaves qualification for the Europa League almost out of reach.

Now Marseille look ready to cash in on Ayew with both Liverpool and Newcastle interested.

Ayew has 18 months left on his contract and Marseille acknowledge that this is the time to sell.

If they leave any decision until the end of the season, there is the risk that Ayew will decide to let his deal run down and leave the French club on a free transfer.