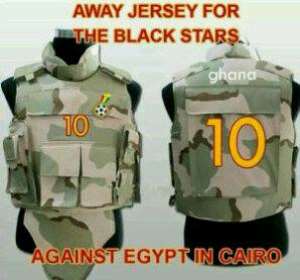 As Egypt plot a miraculous comeback in their World Cup play-off tie with Ghana, mimic military pictures of the Black Stars readiness to battle the Pharaohs in 'volatile' Cairo has gone viral on social media.

Doomsayers have manufactured bullet-proof jerseys on facebook and other social media for the team fearing violence could erupt in the unstable North African country.

Egypt have been thrown into a state of turmoil following the overthrow of Islamist president Mohamed Mursi.

Mursi's supporters have staged frequent protest in towns and cities across Egypt which has resulted in chaos, killing many people.

The army-backed government and the security forces have since July pursued a sweeping crackdown on the Brotherhood, for decades Egypt's biggest political movement, killing hundreds of people, arresting most of its top leaders and accusing many of them of fomenting violence or terrorism.

The unstable situation prompted the Ghana FA to write to FA and ask for the game to be moved from Cairo to as to safeguard lives and properties.

But the world governing body ruled on Thursday that Cairo is safe for the Africa zone World-Cup play-off despite the obvious security threat.

In as much as the pictures are just meant to provoke public laughter, the Ghana FA has not taken kindly to the ruling of FIFA, with the country's president Kwesi Nyantakyi warning the world governing body that it will be held responsible if something happens to their delegation to Egypt.