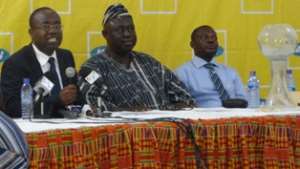 Speaking at the launch, member of the MTN/FA Cup committee Kurt Okraku explained that matches between two division two clubs will be played on a nearby division one club's field because some matches will be telecast live and as such needs to be played on a good pitch.

He also said that the FA will give each team from the second tier league five hundred Ghana cedis as preparation fee for the tournament.