Basketball / NBA: kickoff tonight, what to expect from Africans? 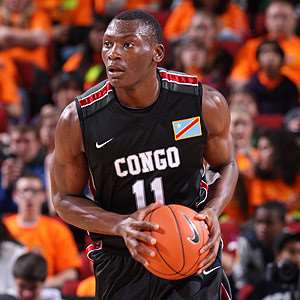 After three weeks of running, the NBA officially opens its doors on October 29. 29 franchises will go to attack the Miami Heat. King James and co are vying for the threepeat .

With reinforcements of Greg Oden and Michael Beasley , they seem even more armed than during their first crowning. Observers of the North American basketball league consider them as major favorite. Lebron James applies for a third MVP in a row that will seek to challenge Kevin Durant and Derrick Rose back. Besides the stars of the league, Africans playing in NBA will try to show up.

The year of the outbreak
http://en.africatopsports.com/wp-content/uploads/2013/10/Bismack-Biyombo.jpg He is not a franchise that plays a leading role in the NBA, but Bismack Biyombo should be the main asset in the Bobcats squad. The Congolese has the confidence of his coach Steve Clifford. With good stats in the preseason including rebounds, Biyombo should be the African with the best progress this year.

Getting into the Pelicans' project
Very often in the five major Pelicans during the preseason game, Al- Farouq Aminu has the chance to take a course for his third season with the New Orleans. The Nigerian winger averaged 7.2 pts ( 47.3 % FG , 21.1% 3-pointers and 73.7 % at launch ) , and 7.5 rebounds per game.

A new chance in the Knicks
With Carmelo Anthony as a trigger, it is clear that the best scorer of the Afrobasket 2013, Ike Diogu will not be the franchise player of the New York Knicks. But after having missed passages, Nigerian interior will have the opportunity to prove he belongs to the greatest basketball championship of the world.

The last chance
The tallest NBA player Hasheem Thabeet evolves in a franchise that plays each season's title: the Oklahoma City Thunder. For his 2m21, the Tanzanian could stand with Serge  Ibaka  in the defensive tandem of the Thunder . Except that Thabeet does not yet show the potential expected and remains even under the threat of rookie Steven Adams in station 5.

http://en.africatopsports.com/wp-content/uploads/2013/10/raps.jpg The first Angolan in the NBA

Quiet since he landed at the Toronto Raptors, Carlos Morais will discover the games of the regular season. The first Angolan prime in the NBA, the MVP of the recent Afrobasket will quickly find his brands to gain playing time.

Other players to watch:
Playing time is also the ongoing challenge of Senegalese DeSagana Diop for his first year at the Cleveland Cavaliers and former resident of the SEEDS Academy, Gorgui Dieng in the Minnesota Wolves. Former Bucks player Luc M'Bah in Moute starts his sixth NBA season. The Cameroonian will defend the colors of Sacramento.

Others could give us ample rewards if they had not opted for other nationalities and we are proud to remember their origins to each output. This is among others, winger (rear) of Golden State Andre Iguodala (USA , Nigeria) , Luol Deng (Great Britain , South Sudan ) and Joakim Noah ( France , Cameroon ) Chicago Bulls , the Thunder Serge Ibaka (Spain, DRC) , the Orlando rear Victor Oladipo , tipped to be the rookie of the Year (USA , Nigeria) , Blazer Nicolas Batum ( France , Cameroon ) and also the Spurs Boris Diaw ( France , Senegal ) .