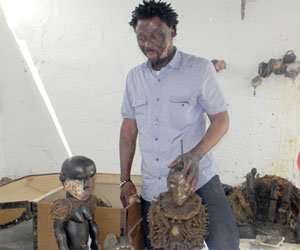 The 6-1 thrashing of Egypt by Ghana in the recent World Cup play-off at the Baba Yara Stadium in Kumasi may ignite a spiritual battle between Kwaku Bonsam, the dreaded Ghanaian fetish priest and Prophet TB Joshua, the head of Synagogue Church of All  Nations, Nigeria.

Kwaku Bonsam was angry with Prophet Joshua, accusing the latter of trying to take undue credit for Ghana's success over Egypt.

The fetish priest insisted that he consulted his gods to help the Black Stars to beat Egypt in the World Cup play-off in Kumasi.

Shockingly, Kwaku Bonsam said, after the game he heard Ghana keeper Richard Kingson bragging that Prophet TB Joshua was the one that helped Ghana to chalk the success.

The dreaded fetish priest insisted that Prophet Joshua had no hand in Ghana's victory so Kingson should not create the erroneous impression that the Nigerian prophet had done anything to help Ghana beat Egypt.

He said if Prophet Joshua's prediction came to pass then everybody would believe that indeed he has powers.

Kwaku Bonsam noted that Prophet Joshua was fond of claiming successes which he has not contributed to.

'Prophet TB Joshua always waits until a feat has been chalked before he comes out to claim responsibility.

'We have had enough of this his weird attitude. If he has powers let him predict the outcome of the Egypt/Ghana second leg encounter.'

The fetish priest maintained that his gods helped Ghana to beat Egypt, warning TB Joshua not to claim the success.

According to him, due to his love for his motherland, Ghana, he performed some rituals which strengthened the Black Stars to beat Egypt in Kumasi.