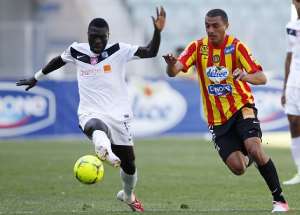 CS Sfaxien defender Seth Konadu says he is considering a proposal from the Tunisian Federation to switch nationality.

Konadu has been stupendous for the CAF Confederation Cup campaigners with his performance earning massive reviews in the North African country.

The former Great Olympic defender claims he is studying a proposal from the Tunisia Federation to switch allegiance to play for the Carthage Eagles.

“It is true. The Tunisia Federation has sent me a proposal to study and accept to play for them, Kondau told Happy FM

“But I am waiting a bit. I am waiting for the play-off against Cameroon. To be honest with you I like the coach and he likes me as well. So it's true that they want me.

“I am talking to my family, people close to me and officials before taking a decision. The final decision has delayed because you know I have dreams of playing for the Black Stars.

“Bu lets wait and see how it goes.”
Kondau played an influential role for the side as they won the Tunisia title last season and will play against TP Mazembe in this year'Scaf Confederation Cup finals.