Updated: Je Sarpong Confirms He Will Quit Aduana Stars To Save His Life 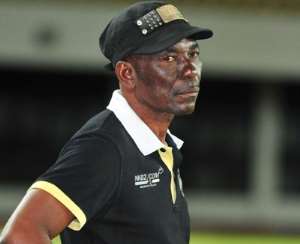 GHANAsoccernet.com revealed on Thursday morning that the ex-Liberty Professionals trainer was considering leaving the Dorma-based side due to mounting criticism over the side's unflattering start to the season.

Aduana were held 1-1 at home by Ashantigold on Wednesday in the Ghanaian top-tier to compound the misery of the veteran trainer and he has confirmed he will resign from the club after meeting the life patron of the club.

“I wouldn't stand at the point of death because of one team.

“I am just waiting for the Chief to come back from his trip abroad and then I tell him my peace of my mind and come to Accra.

“They have played together for four years and they know what to do as a traditional team. The players knew that this team can perform before they started the League so if victories are not forthcoming why the agitations?

“I am waiting for Nana to return, when he comes I will tell him that Nana thank you very much for offering me the job and then I quit”

The experienced trainer replaced Kwabena Ameyaw as the club's head coach at the start of the season after leaving second-tier Bibiani Gold Stars.

He could become the second coaching casualty in the top-tier after Dutchman Hans Vander Pluijm resigned from Medeama.