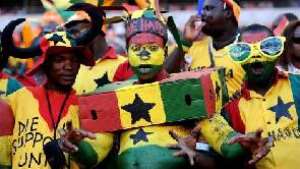 An official of the Ghanaian Embassy in Cairo Egypt says the Embassy has not received any reports of Ghanaians being attacked by Egyptian fans as being reported in the Ghanaian media.

The Finder newspaper on Tuesday reported that some Ghanaians resident in Cairo had been attacked by Egyptian football fans without any provocation.

According to the paper, the Egyptian fans allegedly resorted to assaulting the Ghanaians because of their disappointment over the Pharaoh's 6 -1 defeat to the Black Stars of Ghana in the first leg of the play-off phase of the Brazil 2014 World Cup qualifiers.

However, speaking to Yaw Acheampong, host of Radio Universe' 'Inside Afrika' programme via telephone from Cairo Tuesday, an official of Ghana's Embassy in Egypt who prefers to be anonymous, said the embassy has not received any such reports.

Although she did not rule out the possibility of attacks on Ghanaians by Egyptian fans, the official at Ghana's Diplomatic Mission in Egypt asserted that “no one has come here till now for this reason…Perhaps after a while, I don't know.”