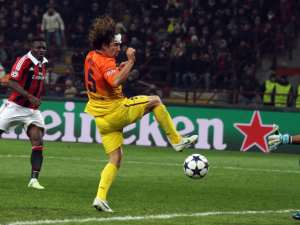 The 28-year-old's recent fine form for the Milan five time European champions was evident on a night Barcelona title credentials were sparingly test at the San Siro.

With the game unfairly balanced and possession shared proportionately, the Black Stars midfielder distinguished himself with his incisive, cutting-edge passes and workaholic effort.

In one of such moments, the former Inter Milan midfielder laid a defense-splitting pass for Robinho to claim victory for Milan but the Brazilian misplaced his effort as Barcelona escaped defeat.

Muntari also had his chance to kill off the game for Milan as a Mario Balotelli unintended searching pass found him at the edge of the Barca box, but a combined effort by Mascherano and Pique ensured he was kept under control.

Somehow, Muntari managed to avoid a second booking which could have sent him off with an early shower but Felix Brych – the German center referee failed to book him on his tackle on Sergio Busquets.

He was booked in the 79th minute for a foul on Iniesta from the edge of the Milan goal area.