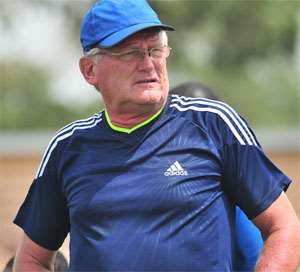 Hans Vander Pluijm has resigned as the head coach of Medeama after just seven games in charge, GHANAsoccernet.com can exclusively reveal.

The Dutch trainer tendered in his resignation on Tuesday morning after an unflattering start to the season.

The Ghana FA Cup holders have endured a difficult start to the season where they have picked a paltry eight points from a possible 21.

“His reason for resignation remains personal. He has thanked the president, board, management members, technical team, playing body and the supporters for the experience gained from the club and collaboration.

“Management has accepted his resignation letter in consultation the president and board directors and we wish him well in future endeavors.

“Management has directed the assistant coach Evans Augustine Adotey to take charge of the rest of the matches till a substantive coach is appointed.”