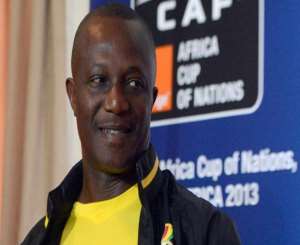 Black Stars coach Kwesi Appiah is on the brink of becoming  $300,000 richer if he is able to guide the Black Stars to the 2014 FIFA World Cup in Brazil, the Finder Sports has claimed.

With an emphatic 6-1 victory over the Pharaohs of Egypt in the World Cup playoffs first leg in Kumasi last week, it would take a miracle of unbelievable proportion for Kwesi Appiah to miss out on the jackpot.

Kwesi Appiah's USD $300,000 jackpot is going to be his bonus for qualifying the senior national team, the Black Stars to the World Cup as stipulated in his two year contract which expires after the tournament in Brazil.

Coach Kwesi Appiah has in the midst of immense doubt over his ability to lead the Black Stars, guided his charges through a difficult World Cup qualifying campaign which began on a jerky note with a 1-0 defeat to Zambia in the Group stages.

He however rediscovered himself and galvanized his charges to overhaul the Zambians at the top of Group D; a Group which comprised of Sudan and Lesotho as well.

After overcoming the Group stage hurdle, the Black Stars were paired against record seven times African champions, Egypt in the playoffs.

That prospects of qualifying to the 2014 World Cup at the expense of Egypt looked like an insurmountable hurdle after the playoff draw, largely because of the pedigree of the Pharaohs on the continent, but after an emphatic and shocking 6-1 thrashing of the Egyptian in Kumasi last week, there is no doubt that the Black Stars are set to appear at another World cup – a third in succession.

For the uninitiated, it is important to know that James Kwesi Appiah was appointed Ghana's head coach in April 2012, taking up one of the most demanding jobs in African football.

The former Asante Kotoko left-back was in charge of Ghana's U-23 team when they won the 2011 All-Africa Games (they defeated South Africa on penalties in the final) and took the step up to the helm of the senior team when Serbian Goran Stevanovic was sacked, following the Black Stars' failure to reach the Africa Cup of Nations final in Gabon and Equatorial Guinea.

Kwesi Appiah's tenure has come with some difficult moments, the biggest of them being the aftermath of a rocky 2013 Africa Cup of Nations campaign in South Africa.

A campaign which saw Ghana failing to end a trophy drought which spans over three decades.

Kwesi Appiah nearly lost his job after that but with no time for a replacement and with the World Cup qualifiers on the horizon at the time; the GFA stuck with him and now the man affectionately called 'Mayele' is on the verge of becoming the first indigenous man to take Ghana to a FIFA World Cup.