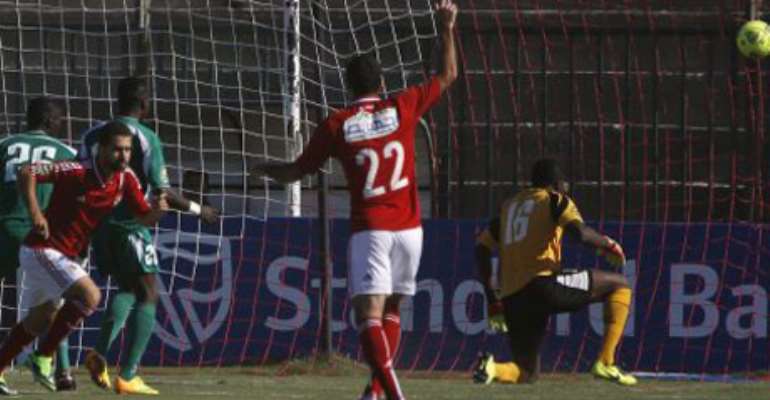 Title holders Ahly lifted some of the gloom surrounding Egyptian football after reaching their second successive African Champions League final at the expense of a spirited Coton Sport side.

Ahly set up a meeting against South Africa's Orlando Pirates after beating Cameroon's Coton Sport 7-6 on penalties following a 2-2 aggregate draw in the Red Sea resort of El-Gouna on Sunday.

The hard-earned win moved some way into easing the pains of Egyptian football fans after the Pharaohs were hammered 6-1 by Ghana in Kumasi in the first leg of the World Cup qualifying playoff last Tuesday.

Ahy, who held Coton Sport to a 1-1 first-leg draw in Garoua, looked to be cruising to a comfortable win when playmaker Abdallah El-Said headed them in front after three minutes.

However, the Red Devils took their foot off the gas pedal in an uninspiring second-half to allow Coton's Kada Yougouda to restore parity five minutes past the hour mark, forcing the game into penalties after both sides failed to notch a decisive goal.

Veteran playmaker Mohamed Abou-Treika, who said he would retire from football following the Club World Cup in December if Ahly won the Champions League, missed Ahly's first spot kick after his effort struck the woodwork.

Numbers were evened up when Yougouda's weak shot – Coton's third spot-kick – was saved by keeper Sherif Ekrami. Both sides converted their efforts until Jacques Haman blasted over the bar in the sudden death, prompting Ahly players to celebrate widely in an empty stadium.

Ahly, who are eyeing a record-extending eighth Champions League title, will feature in their 10 th  final in Africa's elite club competition. They will face a stern test against Orlando Pirates, who beat Tunisia's Esperance on the away goal rule following a 1-1 aggregate draw on Saturday.

The first leg will take place on 2 November in Johannesburg and the return leg will be played in Egypt seven days later.

Below-par
The match, played behind closed doors after Ahly were hit with a two-game crowd ban due to the fan troubles which preceded their group-stage game against Congo's AC Leopards, was largely a scrappy affair.

Ahly needed three minutes to open the scoring when El-Said nipped in between two markers to tower and head home a pinpoint cross from left-back Sayed Moawad.

The hosts had the better possession on a muddy pitch but hardly created any goal-scoring chances. It was Coton who went close with a couple of chances shortly before the break.

Emmanuel Mbongo latched onto a through pass and swiveled to hold off marker Mohamed Naguib, who came under fire for his poor display in Egypt's humiliating defeat by Ghana, but his low shot from a tight angle was blocked by Ekrami.

Shortly after, a right-wing cross eluded Ekramy and found Mbongo, whose shot was cleared off the line by defender Sherif Abdel-Fadil.

A below-par Ahly allowed Coton to launch some breakaways in the second half, resulting in a 65 th -minute equalizer. A low cross from the left evaded Abdel-Fadil and found the unmarked Yougouda, who swept home from close range.

Both sides eased off in the latter stages and Ahly had the upper hand in a marathon shootout to continue their bid towards another continental crown.