Ghana Set For Brazil 2014: A Tactical Review Of The Big Win Over Egypt 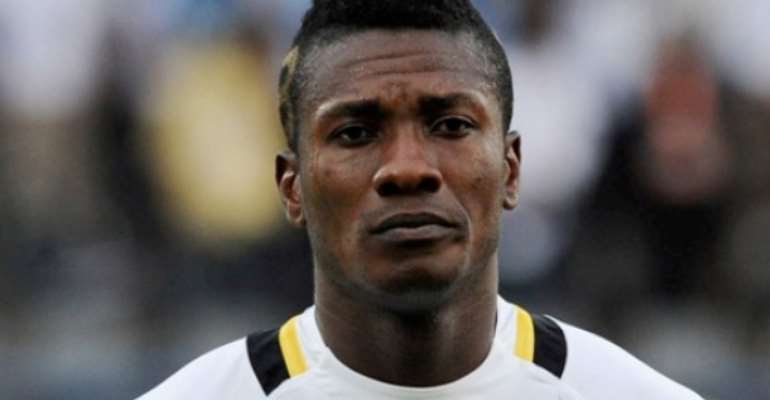 By Ali Fakharany
Ghana's 6-1 victory over the Pharaohs all but booked their spot at Brazil 2014. So how were they able to achieve this surprising result?

Starting Lineups:
Bradley's decision to go 4-3-3 (or 4-3-3-0 essentially) was the major surprise in terms of the structure & shape of the match, although it was the 2nd most popular formation chosen by the KingFut team for this match (read KingFut's XI).

Appiah's decisions had more to do with personnel as a result of the defensive crisis Ghana is undergoing (two starters injured, one suspended). The coach kept the Ghanaian's typical 4-4-2 shape seen in earlier matches, with Opare switching from his typical RB position to LB in order to try and combat Mohamed Salah and Inkoom slotting in at RB. Essien returned for the Black Stars, and Gyan started the match playing off Waris upfront.

First Half Formation
Bradley chose to go with a conservative striker-less 4-3-3, with three combative central midfielders and Abo-Treika leading the attack in a sort of 'false nine' role. The thinking was probably to slow down Ghana's powerful midfield, their obvious strength, by having three holding midfielders as well as Treika dropping deep to get the ball. Protection of Egypt's center backs against the Ghanaian's pacier frontline seemed to also weigh on Bradley's mind, evidenced by the setup and the selection of the faster Kenawy instead of Moawad at LB

Key Battles:
Salah vs. Opare: The fill-in LB ability to deal with Salah seemed to prove crucial to Ghana's survival

Gyan vs Naguib: A Ghanaian strength matched up against an Egyptian weakness made this a key individual battle

Essien/Muntari vs. Ghaly/Ashour/Nenny: Center midfield power by Ghana trying to be combatted through a numerical advantage.

Ghana direct, Egypt CBs struggle 2 on 2:
Ghana started the match on a bright note, pressing from the first minute and energized by the home crowd behind them. Within 10 seconds they could've taken the lead when a mistake by the Egyptian defense allowed Gyan to get a clear shot at goal, but Ekramy saved.

Ghana pressed high up the pitch early, forcing the Egyptian backline into a series of consecutive errors and dominating possession for the first couple of minutes. As noted in the tactical preview by KingFut here , Ghana usually favor a direct style, knocking long balls for their fast strong forwards to latch on and either turn and run, or wait for support. Poor positioning by the Egyptian defensive midfielders, as well as a lack of pressing up front due to the absence of an out-and-out striker, led to the Ghanaian defense and defensive midfield completely bypassing the midfield zone and getting the ball to their two strikers constantly, challenging the Egyptian CBs.

1-0:
Ghana's first goal on 4 minutes came as a result of the previously mentioned poor positioning of the defensive midfield. As you can see in the snapshot here:

All three defensive midfielders are bypassed completely by Essien's direct ball to Waris, with no depth whatsoever provided by Ghaly or Ashour. This leaves Egypt's two CBs 2 on 2 with Ghana's strikers. Gomaa tries to play Gyan offside but is let down by Fathi on the right, and it turns into a foot race between Gyan and Naguib, of which there will only be one winner.

This goal highlighted a key theme in the game, the Ghanaians bypassing the Egyptian's numerical advantage in the midfield zone (4 vs 2, with 3 CMs+ Treika up against Essien and Muntari) due to poor positioning and the use of long balls.

Essien and Muntari were absolutely dominant at this point, pressing well and using the ball extremely well to take advantage of the Ghanaian's superior pace.

Naguib vs Gyan, CB-LB zone:
As evidenced by Bradley's team selection, he was obviously worried by the Ghanaians' pace and ability to beat Egypt's CB. The coach identified the correct thing to focus on by protecting his CBs, but poor execution let him down by the trio of midfielders as well as a disastrous performance by Mohamed Naguib. Naguib was absolutely torn apart by Gyan's movement, and had no answer for his pace. It was a failure of the team that Ghana was able to isolate this matchup and a failure by the player to do anything to stop Gyan from having his way with him.

The relationship between Naguib and Kenawy was also put under pressure a lot by Ghana, with Kenawy guilty of not lending enough help his CB in dealing with Gyan, who exploited the space left between them. Gyan lateral movement was excellent, drawing Naguib out to the left in the space left behind Kenawy and beating Naguib countless times. The second goal came through this flank, with Soliman misplacing a pass that led to a Ghanaian counter attack down the right. Kenawy was caught out, and Ashour who had the responsibility of covering for him did not track back (although in fairness he did get injured on the play) allowing Essien to break free and beat Naguib once more in space.

Gyan Movement vs CB-LB
As seen in the image, Gyan used the space between Kenawy and Naguib to his advantage, with Naguib struggling to match him for speed and Ashour providing bad cover.

Ashour injury; Bradley reshuffle:
Right after the second goal, Ashour was injured, giving Bradley an opportunity to reshuffle. Elmohamady came on and Egypt switched to their familiar three at the back shape, with Ghaly dropping back and Fathi moving to CM. Bradley probably wanted to stop the Ghanaian forwards from getting 2-on-2 opportunities in the back, dropping Ghaly in order to have a numerical advantage. Salah also switched flanks with Soliman, perhaps to compensate for the fact that Elmohamady is more of an attacking RB.

Bradley Reshuffles
Adjustments improve Egypt:
Bradley's adjustments immediately made an effect, with Egypt's extra man at the back allowing them to pass out of the back more comfortably and stop Gyan (who was great) and Waris getting opportunities to challenge Naguib and Gomaa. Naguib also switched sides with Gomaa, allowing Gomaa to directly challenge Gyan who was giving Naguib a very difficult time prior to the switch. Fathi also solidified the CM area, getting in more tackles than Ashour had the entire match and injecting some energy into Egypt's play.

Salah on the left:
With Kenawy pressing further ahead in his new role as WB, Inkoom vs. Kenawy became a much more direct battle, with Inkoom finding much more space to get forward. Although he presented much of an attacking threat, this also allowed Salah to find space left behind more frequently, and from the moment Egypt switched to 3-5-2 he became much more of a threat. He was brought down on the counter attack by Akaminko once in a dangerous situation, and a couple of minutes later won the penalty that got Egypt back into the game by outpacing Sumalia who charged into him chasing a ball over the top.

Salah finds space down the left
At 2-1, the game seemed finely balanced as the Egyptians seemed to have adjusted and found a way back into the game.

The respite was short-lived however, as only a couple of minutes later Ghana scored off a set piece aided by some terrible defending by the Egyptian backline. Elmohamedy was left alone with three players in the back post, with Waris outmuscling him to score a third and kill Egyptian momentum. A general theme throughout the game was the Ghanaian's dominance in the air, aided by the raiding forward of their two CMs. That third goal was a huge momentum shift, heading into halftime up two again instead of up one.

At half time, Bradley inserted Shikabala instead of Kenawy, dropping Soliman to LWB. The intention seemed to be to give Egypt more of an attacking threat, as a second away goal could've proven to be extremely valuable. Also, Kenawy's performance left a lot to be desired both positionally and physically. The substitution was Bradley's worst in-game decision though, as Shikabala, a very creative in-game player, was not nearly as energetic or diligent in closing down the Ghanaian defense and midfield. This allowed Ghana to continue their dominance.

After half-time the same pattern continued, with the Ghanaian's directly challenging Egypt's now three CBs, although an emphasis was placed on challenging them aerially, something we touched on in the preview.

Gyan was able to get away from Naguib again and head home a Muntari scissor kick giving Ghana what seemed to be an infallible lead. It was Shikabala who should've closed down the Muntari cross but was too late getting there.

Rout:
At 4-1, the game seemed to be over and the Egyptian team looked a mess, both structurally and mentally. Balls over the top continued to be a problem, and backup keeper Shenawy (who came on for the injured Ekramy) gave away a penalty a couple of minutes later to make it 5-1. Although the decision was a little harsh, it was another example of the Black Stars getting in behind the Egyptian backline, which had been saved countless times in the first half by Ekramy. Ghanaian domination continued in midfield, and a sweet strike by substitute Atsu completed the rout at 6-1.

Conclusion:
Although tactics and shape were a factor in this match's outcome, essentially it was decided by individual performances. Egypt CBs both had completely horrible games, as well as Ghaly who dropped into CB for the second half. They could not compete with Gyan and Waris, especially aerially. Although Mohamed Naguib will be singled out (compounded by his couple of attacking misses), Gomaa was also very poor and Egypt obviously missed Ahmed Hegazy's aerial ability tremendously in this match, a fact mentioned in our preview.

Bradley's adjustments were made with the right thoughts in mind, but he was let down by poor player performance. The decision to start with Kenawy on the left, as well as no striker may be questioned though, as perhaps Zaki competing aerially and closing down the Ghanaian back four may have helped the Egypt back line a little. The Shikabala substitution also had an adverse effect, as it led to less pressing and energy in the Egyptian midfield.

The Ghanaians must be commended on an absolutely dominating display. Their front six can compete with anyone in the world, with Essien and Muntari laying the base for a powerful midfield. Gyan also was spectacular, and the dynamism of the front four admirable. Their only question marks remain at the fullback position, which may be solved by playing Essien/Muntari more defensively. Their CBs were a little shaky this match, but both are not considered to be part of the starting XI. Ghana both outplayed and outthought the Egyptians, and is fully deserving of a chance to represent Africa at the highest level.