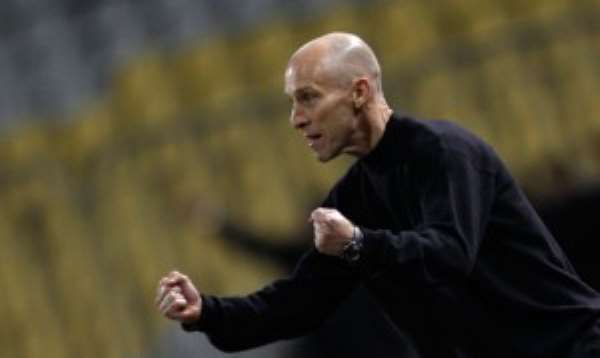 American coach Bob Bradley is set to be sacked by Egypt on Monday when the Egyptian FA (EFA) holds an emergency meeting to discuss the Pharaoh's crushing 6-1 defeat to Ghana on Tuesday but the EFA President has asked the American to step down.

EFA President Gamal Allam has already asked Bradley to step down and let another figure lead the return leg scheduled for next month.

However the EFA spokesman Azmi Megahed says they will have to delay the sacking of Bradley until the end of his contract in November to avoid FIFA sanctions.

This comes after that emphatic defeat squandered the Pharaohs' dream of reaching the World Cup for the first time since 1990.

“We will ask the coach during the meeting what led to this humiliating defeat. We will also discuss his future, but it is likely that he will stay in charge until the return leg to avoid the release clause,” Azmi Megahed told a sports TV program.

Egypt hired American tactician Bob Bradley in November 2011 to lead the Pharaohs to the World Cup 2014. His contract runs until the end of the World Cup qualifiers with an extension option.

With Egypt practically eliminated, there will be no need to sack him now to avoid paying the amount of the release clause that is 45 000 USD.

However EFA President Gamal Allam has asked Bradley to step down and let another figure lead the return leg.

The Pharaohs are scheduled to host Ghana on 19 November in Cairo and need a five-goal margin victory to maintain their hopes of reaching the World Cup finals.