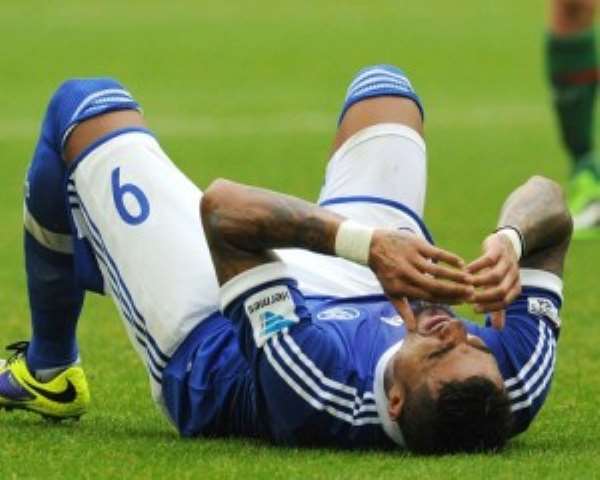 German club Schalke have ruled out Ghana midfielder Kevin-Prince Boateng from next week's crucial 2014 World Cup playoff clash against Egypt even though tests are yet to be carried out to determine the full extent of his injury.

The 26-year-old was forced off during their 4-1 win over Augsburg in the Bundesliga on Saturday because of the injury on his troublesome left knee. http://www.ghanasoccernet.com/breaking-news-kevin-prince-boateng-suffers-injury-germany-doubtful-ghana-egypt-clash

The injury came just two days before he arrives in Accra to join the Black Stars to prepare for the first-leg of the clash against Egypt in Kumasi which will determine which country qualifies for the 2014 World Cup in Brazil.

But Ghanaians retained hopes that tests on the knee could make Boateng available for the Black Stars in the match they must win to cushion themselves ahead of the second leg in Cairo.

However, Schalke sports director Horst Heldt says he fears Boateng will not be available for Ghana when they take on Egypt in nine days' time in Kumasi.

“I fear that he (Boateng) has to cancel his invitation for the national team,” said Schalke sports director Horst Heldt on the Ghanaian national team.

Boateng, who is expected to be one of Ghana's key players in the match against the Pharaohs, scored in the 16th minute of the match after converting a penalty.

It was his third goal in five Bundesliga appearance for Schalke since completing his shock move from AC Milan at the end of August.

But he was substituted in the 68th minute by youngster Meyer with what looked like a serious injury which could affect his chances of playing in the Ghana-Egypt match in Kumasi on ten days' time.

The full extent of injury is not known however the decision to substitute him in the match has sparked fears for Ghana who are seeking an emphatic win in the first-leg to make the return match a formality.

The Black Stars squad has already been decimated by injuries to Rabiu Mohammed, John Boye and Jonathan Mensah and a serious injury to Boateng will further deplete the Ghana squad for the match.