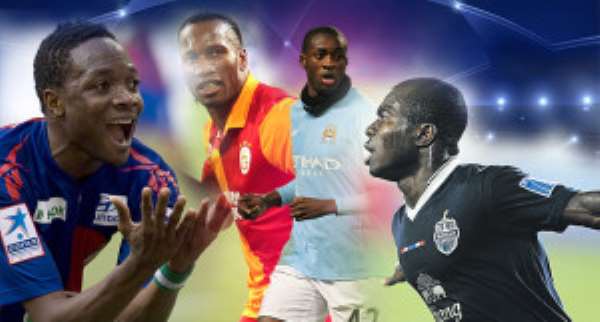 http://en.africatopsports.com/wp-content/uploads/2013/10/drogbacheamp.jpg In the menu of the today's meetings in European Champions League, some international African can make a difference. Africa Top Sports introduces the forces.

The large contingent of Africans will surely be seen during the game Andelrecht-Benfica. In the Mallows, the poster headline will be the young Ghanaian Frank Acheampong , sparkling in this season in Jupiler Pro League. If he scores forward he can count on the impressive physique of the Senegalese Cheikhou KouyatÃ© to stop everything. Because they will have to beware of the onslaught of the Greeks of Olympiakos. Especially Mali's Sambou YatabarÃ© . Not sure to see him holding but his coming into play could make a difference. In defense, the Cameroonian Gaetan Bong and the Algerian Carl Medjani want to forget the nightmare against PSG.

New free kick from Yaya Toure?
CSKA Moscow wants to recover from their defeat against Bayern Munich at the opening of the competition. The Russian club for this occasion will have to rely on the Nigerian Ahmed Musa face the Czechs of Viktoria Plzen.

Everyone expects the first goal of Didier Drogba in the Champions League this season. He will be under Roberto Mancini, successor to Fatih Terim. But the task will surely be tough against Juventus which will have in its ranks the Ghanaian Kwadwo Asamoah . Not forgetting also the presence of the Cameroonian Aurelien Chedjou and Danny Nounkeu or the other Ivorian Emmanuel Eboue and the Moroccan Nordin Amrabat in the Cibum.

Will Yaya Toure once again put one of these free kicks of which he alone has the secret this season? Against Bayern Munich, this can probably save his team. City-Bayern is also one of the posters of the day.

Section of N1 Highway to be blocked for GRIDCo’s stringing w...
52 minutes ago