Its make or break for Queens 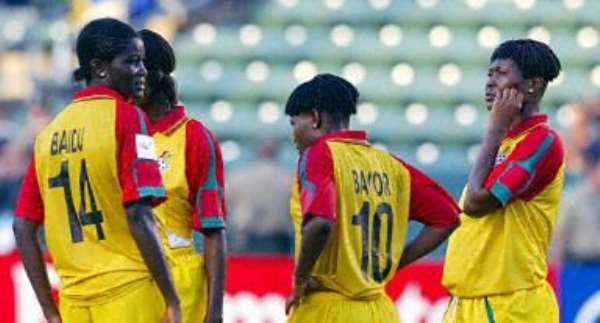 All eyes will be on Ghana today as lovers of soccer will watch with keen interest as the two giants of African women soccer, the Black Queens of Ghana and the Super Falcons of Nigeria cross swords at the nation's Wembley, Accra Sports Stadium to determine who represents the continent in the next Olympic Games slated for Athens, Greece. Having tied one all a fortnight ago, coupled with the usual rivalry that comes with matches involving the two West African countries, it would certqainly set the stage for an uncompromising encounter fit for the gods. With chances of each of the team as equal as ever, the Queens will aim to ride on their vital away point pulled against the Nigerian Queens in Ibadan in the first leg added with the return of their skipper, Alberta Sackey to snatch victory from the jaws of their "soccer foes" on Saturday. Knowing the extent of the stakes in the encounter which will see the victor meeting the winner of the South Africa and Angola match for the continents' slot, the Coach Oko Aryee girls will have every good reason to die for the maximum points. The Falcons who on the other hand have over run the Queens in all matches played in Ghana will be hoping to repeat the dose and take inspiration from their inform skipper, Mercy Akide to confirm their superiority over the Ghanaians in their backyard. Obviously, the battle lines are already drawn for a crucial duel between the two sides who will aim at out doing each other for the points and with each other's clarion call being, "go for the points", none of the sides need to be told that fans who will throng the Accra Sports Stadium will have a lot to cheer about. With the moral of the Queens souring by the day, Coach Ismaila Mabo of the Falcons who told the GNA Sports that though he anticipates a crunchy encounter, the Queens will succumb on Saturday since he is determined to re-strategize on how to contain the Queens trio of Adjoa Bayor, Florence Oko and Genevieve Clottey who are poised to keep the mid-field intact. Falcon's skipper, Marcy Akide who ply's her trade in America might be convinced that Sackey will be no threat to her side, but it remains a big doubt as to how Nkechi Egbe and her girls at the back can stop such young and enterprising stars as Gloria Oforiwaa and Akua Anokyewaa who are poised to register a goal in front of their expected home crowd. The absence of injured Patience Avere in the Nigerian's team could possibly not affect their chances since they believe the Queens were lucky to have run away with the one all drawn game and according to coach Mabo, he believes the Queen's defence pivoted around Elizabeth Baido, Mavis Danso, Lydia Ankrah and Aminatu Ibrahim would not be a to the worry the likes of Florence Omagbemi, Perpetual, Stella and Akide. With goalkeeper Memunatu Sulemana who stood between her soccer rivals and goals in the first leg, the Queens are expected to again take inspiration from the visit of Mrs Theresa Kufour, the first lady, to make the country proud as the two teams revive the long standing rivalry between Ghana and Nigeria come Saturday.