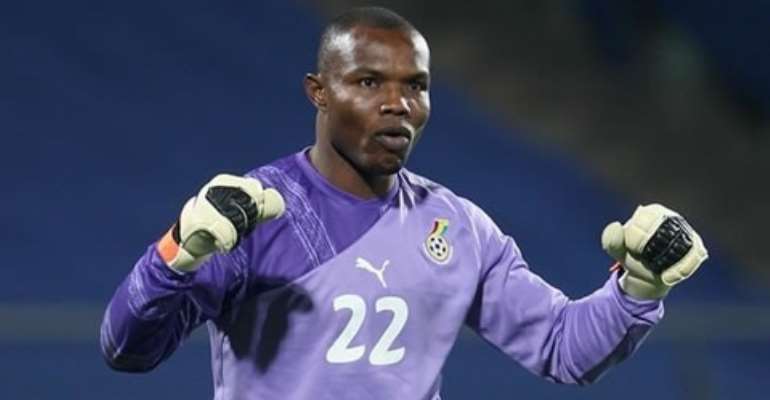 Head coach Kwasi Appiah is currently monitoring Richard Kingston for a possible call up to the team ahead of the first leg World Cup play-off game against Egypt next month.

Kingson lost his position as first choice goalkeeper in the Black Stars three years ago following his inactivity at club level.

But his return to active football in recent times after signing for Doxa in Cyprus and the inconsistency in the goalkeeping department as fuelled a possible return.

"I can confirm that there has been some contact with Richard Kingson and the technical team is currently monitoring his performance just three weeks to the big game and if the technical team is convinced that Kingson is in good form I do not think they will hesitate in inviting him and we in management will also embrace it," said Ghana FA president Kwasi Nyantakyi in an exclusive interview with Joy sports

Kingson was between the sticks for Ghana at the 2006 and 2010 World Cup finals in Germany and South Africa but lost out his place in the team following his difficulty in finding a new club after he was released by Blackpool in May 2011.

Kwasi Nyantakyi who doubles as Chairman of the Black Stars management committee added that if Richard Kinston is playing consistently then he will back his return to the Black Stars.

"Why was Richard dropped from the national team? It was because he became clubless so if he is now playing then there is every opportunity for him to come back provided he is playing well."

"For such a veteran goalkeeper like Richard Kingson I believe if he is indeed playing well and he gets the chance to come back to the national team it will be a big boost to the team's chances of qualifying to the World Cup because with Richard Kinston you can go and sleep if he is in good form because he is the best pair of hands we have had in the country," he added.

"Anytime he got the chance to play for the Black Stars he never disappointed even when he is injured he tries to keep the post.

"Richard Kingston has been there for a long time, he is been in and out of the Black stars and so if he is doing well, he has a chance to come in and we all will welcome and embrace that gesture."