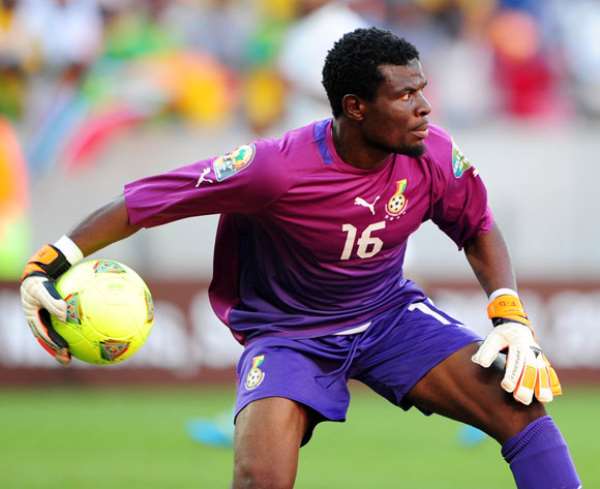 Former Ghana goalkeeper Abukari Damba has said the Black Stars has a goalkeeping problem which if not checked, could cost Ghana a place at next year's football World Cup in Brazil.

The former Real Tamale United and Accra Great Olympics shot stopper told Happy FM on Wednesday that Ghana cannot boost of a world class goalkeeper at the moment and this could be 'our undoing' when Ghana plays Egypt in the plays offs for the 2014 Mundial.

'There is no reliable number one in the current Black Stars team', he stressed, adding that the position is up for the taking as the likes of Fatau Dauda, Adam Kwarasey, Razak Braimah and Daniel Adjei cannot be considered as up there with the best in the world.

According to him, none of the above can claim to be the number one and those trying to step up cannot be trusted either making for a gloom future for Ghana football in that department.

Damba, who is now a goalkeepers coach laid the blame on his fellow trainers for not upping their game in the area of spotting new talent, and said, he would welcome the idea of recalling Richard Kingson back into the team.

The veteran who kept post for the Black Stars at both the 2006 and 2010 World Cup, recently signed for Cypriot club Doxa Katokopias and there have been calls within certain quarters in the Ghanaian game foe his recall into the team after gaining the number spot in his new club.

'I will welcome his recall as he has the experience and has proved himself in that department in the past', Damba stated, adding that Kingson could be what Ghana needs to face Egypt in this crucial play off.

However, Black Stars goalkeeper's trainer, Nassam Yakubu has rebuffed those assertions by Coach Damba saying there is no problem in the goalkeeping department of the team.

He told Happy FM that the technical stuff has always been happy with the talent they work with, saying competition for places is always keen at all times and is hopeful that Ghana can overcome whatever 'Egypt will throw at us as we seek to make it to a third Mundial in succession.