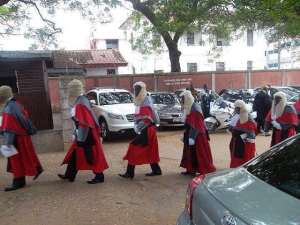 After perusing the reasons for the decision of the recent Supreme Court Case of Nana Addo & Ors challenging the validity of the election of John Mahama, it is clear from the reasons that the Court committed a jurisdictional error of law in its voting.

The purpose of this article is to explain how the error came about. Although it is accepted that the dust has settled and the petitioners have decided not to seek a review and Ghana has decided to move on to 2016; it is however important for intellectual and academic reasons to conduct a thorough analysis of the decision to see whether the court was correct in its decision.

It is, and always has been common ground that before the case commenced, the court set out only two issues to be determined, sic:

(1) Whether or not there were violations, omissions, malpractices and irregularities in the conduct of the presidential election held on the 7th and 8th

December, 2012?
(2) Whether or not the said violations, omissions, malpractices and

irregularities, if any, affected the results of the election?

It therefore follows that to dispose off the case; the court had to resolve the above issues. It is absolutely important to understand (to avoid getting confused) that the above were the only two issues to be determined by the court. Once the two issues were set for trial, the only votes that were to be conducted by the court is in relation to issue (1) and (2) above, otherwise the court would fall into an error of law as it would be asking itself the wrong question, identifying the wrong issue, taking into consideration irrelevant issue, ignoring relevant material and so on...

The determination of any other issues was extraneous to the matters that were set out for trial before the court.

But the Supreme Court did not vote on the issue itself set for trial. It instead voted strangely on the evidence individually. This was plainly in error as it calls into question the very purposes for which the issues were set for trial. On 29 August 2013, Justice William Atuguba, president of the nine panel Supreme Court judges, read the verdict in an open court as follows:

He further went on to state as follows: 'In the circumstances the overall effect is that the first respondent was validly elected and the petition is therefore dismissed,"

Plainly the court did not go by voting on the issues it set for trial. It merely voted individually on the evidence. This is erroneous. It is an error going into jurisdiction because it voted on matters which did not form part of the issues that were set down for trial. The evidence (which they voted on) was necessary only in forming the 'satisfaction' or 'dissatisfaction' whether the issues set for trial were made out. It therefore follows that the decision was ultimately frustrated resulting in a very confused or erroneous result. This is why it is very difficult to understand how very sage judges could get something as basic so wrong.

So the question is what then would have been the result if the court voted in accordance with the issues they, themselves set out for trial?

To answer this question one has to look at the reasons of the court. After careful reading of the decision it appears that five of the Justices held that (per Julius Ansah, Rose Owusu, Jones Dotse, Anin Yeboah, and Baffoe Bonnie JJSC) there were irregularities that were enough to affect the results. Consequently if the court had not misconstrued their task, the majority would have voted YES to issue (1), and YES to issue (2) above resulting in a different outcome to that as read by Justice Atuguba.

Indeed after reading the decision it is reasonably clear that the justices so held. They only differed in the consequential orders that they made. However the decision was confused because of the way they voted on the evidence, contrary to the issues they set for trial. But again upon careful reading of the judgement it is clear that the majority of the court 5:4 held that there were violations, omissions, malpractices and irregularities which affected the outcome of the results. However because the court got it wrong in the manner in which they voted, they erroneously concluded that John Mahama was validly elected which in law was a perverse outcome.