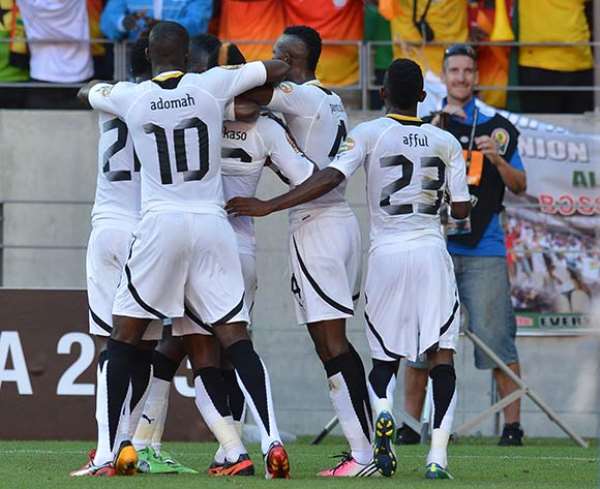 Renowned sports writer and broadcaster, Kwabena Yeboah is rooting for the Black Stars to start as favourites and beat Zambia's Chipolopolo on Friday when the two sides clash at the Baba Yara Stadium in Kumasi for the 2014 World Cup qualifier.

He says if anything at all, Stars' Coach Kwasi Appiah, yearning to write his own history as the first indigenous coach to send the team to the World Cup, would be spoilt for choice.

That is the challenge the coach must manage, plus, the team should also be able to psyche up the players for battle as their quality is never in doubt.

But Kwabena Yeboah, who indulged Radio Gold with a telephone interview Thursday, is also cautioning that his expression of confidence in the team is in no way a dismissal of the clear threat the Zambians pose to the national desire for another World Cup berth.

The Chipolopolo, African champions only two years ago, are capable of upsetting any side on the continent even though they have not been doing too well lately.

Besides, they are motivated and hungry for a World Cup showing of their own.

Kwabena Yeboah spoke via phone from Kumasi where he has already pitched camp for the big match, and described the atmosphere as having already hit frenzy levels.

“Well I personally feel that player for player the Black Stars have the edge over the Zambians, I think so. The only concern from certain quarters is the introduction of players who are considered 'returnees' to the side – Kevin-Prince Boateng divides opinion; Dede Ayew; as well as Michael Essien. Opinions are divided over the introduction of these players particularly at this time. There are some who believe that these are some of the best players in the world and so if you want to make an impact you need to get the best of your players so that the coach has the luxury of options.

“Now there are others who also believe that for those who hoisted the national flag in the absence of these players, it would be unfair to shove them aside to bring these players. But I want to believe that just a day before the match I do not think that this is the time for us to get into this kind of discussion…”

“That is far from suggesting that Zambia cannot beat Ghana. They are capable of beating Ghana as I indicated. This is a team that is very, very hungry. They know that only victory will aid them to the next stage of the competition and I indicated they have a reasonable squad so they are capable of beating the Black Stars. But when (if) push comes to shove I want to believe that the Black stars should have an edge over the Zambians.”

He said the Black Stars also have problems in camp regarding Captain Asamoah Gyan and K-P Boateng while the sudden absence of Adam Kwarasey means a match-rusty Fatau Dauda keeps the post. There are however equally good materials in camp to do the job.

“I believe that the problem would be the team selection because if you have Kevin-Prince Boateng, if you have Dede Ayew, if you have Michael Essien, what does the coach do? Does he defy to start them from the bench? Is he going to start them in the team and break the cohesion that the team has enjoyed in the last couple of months? What is going to be the psychological make of the team? What do they make, is it going to break team spirit? Are some of the boys going to suddenly consider the fact that probably they are being treated as inferior materials, that during tortuous and serpentine times they stood firmly in the games against Lesotho, in the game against Sudan home and away and when some have a sniff of the World Cup they come and suddenly they are shoved aside? So I believe that Prof. Mintah who is the psychologist of the team will need to do a lot of work psyching the players. But at the end of the day it is the supreme interest of the nation that matters, not individual sentiments and individual and parochial ambitions. If he is able to psyche them, it doesn't matter who starts and who starts from the bench or who starts on the playing field, at the end of the day it's the question of whether or not the Ghana has succeeded in calling the bluff of Zambia and shoving them aside to progress to the next stage of the competition.

“So a lot of work will have to be done on that side. If they are able to do that, I want to believe that in purely footballing terms, footballing language, the Black Stars should start as the huge favourites against the Chipolopolo,” he said.

The Black Stars with 12 points lead Zambia with just a point and must either win or draw to advance to the next stage while Zambia have no choice but to win the game to make progress. The team to advance secures a place in a two-leg tie for one of Africa's five slots for Brazil 2014.

Sudan and Lesotho, the other Group D candidates have long given up on the race after securing paltry two-points apiece. They play each other at the weekend with Sudan hosting.

The desperate Zambians have resorted to all manner of games –  some psychological, others blatant lies http://graphic.com.gh/Sports-News/gfa-reacts-to-zambia-media-reports.html  – to court attention, but these are tricks Kwabena Yeboah believes should have no effect on the focused Black Stars, who, should they fail, would have committed a monumental embarrassment to their own pedigree as Africa's best performers at the World Cup.

Galamsey fight: Four Chinese nationals to be deported
2 minutes ago

Gov't must opt out of Sputnik-V vaccine procurement contract...
2 minutes ago