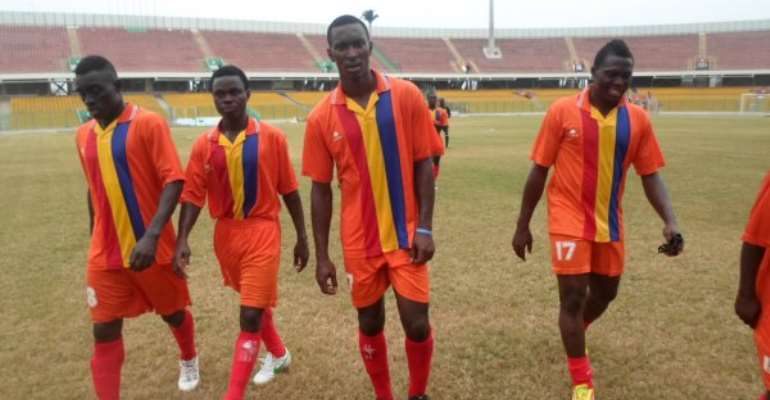 Hearts of Oak whipped third-tier side Global Academy 6-0 at the Accra Sports Stadium on Saturday in the first preparatory game of the off-season.

New signing Selasie Adjei started the rout with a well taken goal in the opening minutes of the game, young striker Kenneth Okoro and the exciting Winful Cobbinah scored a second half brace each after joining the action in the second half and the hardworking Owusu Bempah was also on the score-sheet with a beauty from the edge of the box.

The goal blitz in the second half ensured Hearts fans who thronged the stadium went home in high spirits after witnessing an avalanche of assorted goals capable of winning the goals of the season competition.

Stephen Tetteh and Emmanuel Hayford anchored in midfield whilst Ollenu Ashittey and Thomas Abbey gave the team width from the flanks.

It did not take long for the attacking duo to open the scoring with less than a quarter-of-the-hour gone when Romeo Agban picked out Selasie Adjei in the box with a neat pass. The striker kept his cool to slot home for his new side much to the amusement of the home fans.

Selasie Adjei went close again to scoring, after Romeo had slid open the defense of the visitors, controlling the ball beautifully, the striker did everything right but the young Benard Quaye in goal for the visitors was equal to the task with an acrobatic save of the top-corner-aimed strike.

Global Academy, true to their name, stuck to their game plan with possession based football as their bulwark. Hearts also responded with tailored passes from defense through to attack.

However, Hearts dominated the visitors late in the first half by pitching camp at the other end where many chances went unfinished much to the credit of the Global Academy goalkeeper Benard Quaye.

Romeo Agban was fouled close to the box after beating two defenders and from the awarded free-kick, the attacking midfielder rose highest to head the ball on target with the last defender clearing the ball off the line and back to Agban again who sent in another header only to be denied by the agile Benard Quaye.

With the half coming to an end, the players were in for a query on the touchline as Coach David Duncan pointed out individual errors and which part of the game needed remedy.

Back from recess, David Duncan altered his side by introducing four new players into the game.

The substitution worked magic as a minute from restart, Winful Cobbinah exploited space on the edge of the box by releasing a thunderbolt strike from 30-yards with the flight of the ball beating the Global Academy keeper for the second goal of the game.

Buoyed by the second goal, the players upped the tempo, passing at a faster pace with strikers getting into good positions and the midfielders finding them at will.

Kenneth Okoro marauded into the box after good buildup from midfield and forced his way into the heart of the Global Academy defense, beating a defender and the goal-line, the striker pulled back for Winful Cobbinah to fire in his second on the day and Hearts' third in off the cross bar in the 63rd minute.

Five minutes later, Cobbinah put Okoro through with an angled pass, and the giant youngster without breaking stride rifled in the fourth goal of the day.

Credit to the visitors, Global Academy did not shut up shop as they kept attacking Hearts in an effort to salvage a face saving consolation but the defensive wall of Gnange, Abankwa, Bempah and Andoh stood tall.

Kofi Abanga replaced the energetic Emmanuel Hayford, and the midfield maestro was instrumental in circulating the ball quickly for the attackers.

Philemon McCarthy, who came on for his first game for Hearts in close to 8 months in the second half, was tested by trigger-happy Jacob Lartey but he saved comfortably from the youngster and quickly set Hearts on a swift counter with a measured pass for Winful Cobbinah on the half way line.

The mercurial Cobbinah was clean through on goal but as he steadied to shot, he was brought down on the edge of the box.

Hearts allowed Global Academy all the possession in the last quarter of the game and opening-up the Academy side on the break.

Owusu Bempah, who had worked tirelessly in defense and attack, proved so unselfish in the box after meandering through the forest of legs, sent an inviting cross for Gabriel Darko who failed to connect the ball into the gaping net in the 77th minute.

The left full back's endeavor on the day was however rewarded when he luckily picked up a ball on the edge of the box and curled a cute cross-shot into the right top corner for the fifth goal in the 87th minute.

With the clock running down, Gilbert Fiamenyo flicked the ball for Kenneth Okoro who controlled it with his chest onto his left foot, and back on the ground as he raced through on goal. A little drop of the shoulder in the box to dummy the defender and goalkeeper, the young striker hit a thumping shot into the roof of the net for the final nail in the visitor's coffin.

The home fans were so excited with the football served by David Duncan's side and the technical team also have their hands full with a lot of permutation for the coming season.