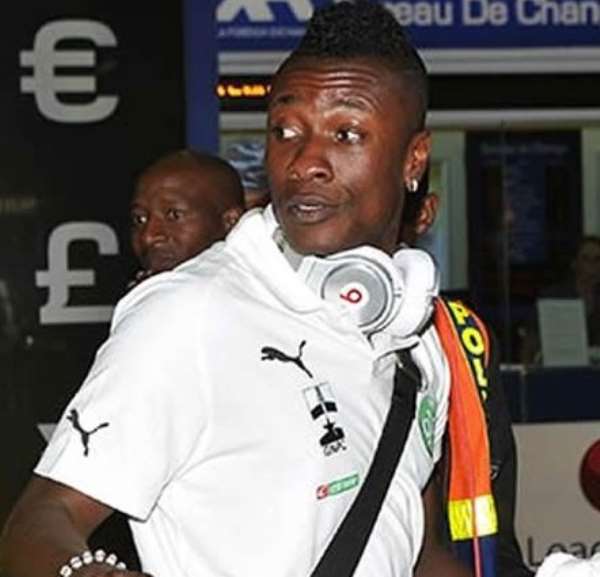 Ghana captain Asamoah Gyan is the first player to arrive for next week's crucial World Cup qualifier against Zambia after touching down in the country on Saturday morning.

The 27-year-old arrived on a private jet under 24 hours of his cup disappointment in Al Ain's penalty shootout defeat to Al Ahli in the UAE Super Cup match.

Gyan thus becomes the first player to arrive for Black Stars duty contrary to reports South African-based trio Fatau Dauda, Rashid Sumaila and Mohammed Awal who are in action this weekend were to arrive on Thursday.

The former Sunderland hitman proved his fitness after suffering a knock in training by playing the entire duration of the Boss' defeat to Ahli on Friday night.

He even stepped up to convert the side's first kick in the penalty shootouts but eventually ended up on the losing side.

Gyan's early arrival shows his immense commitment to the national team ahead of the crucial qualifier against Zambia this coming Friday in Kumasi.

He is determined to help banish recent heartaches suffered at the hands of the Chipolopolo – with one forcing him to take an almost six-month break from the Black Stars.

The Ghana captain has been in inspired form in recent times for both club and country.

He has scored in his past four goals in Ghana's last three wins in the qualifiers to ensure the Black Stars remain on track to making a third successive World Cup appearance next year in Brazil.

Ghana only need to avoid defeat against Zambia in the last Group D match on Friday to secure progress but the Black Stars are determined to atone for recent back-to-back defeats suffered at the hands of the 2012 African champions.